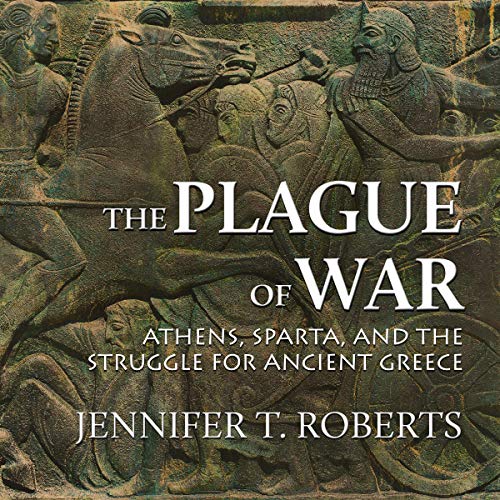 The Plague of War: Athens, Sparta, and the Struggle for Ancient Greece

In 431 BC, the long simmering rivalry between the city-states of Athens and Sparta erupted into open warfare, and for more than a generation the two were locked in a life-and-death struggle. The war embroiled the entire Greek world, provoking years of butchery previously unparalleled in ancient Greece. Whole cities were exterminated, their men killed, their women and children enslaved. While the war is commonly believed to have ended with the capture of the Athenian navy in 405 and the subsequent starvation of Athens, fighting in Greece would continue for several decades. The war did not truly end until, in 371, Thebes' crack infantry resoundingly defeated Sparta at Leuctra.

Jennifer Roberts' rich narrative of this famous conflict is the first general history to tell the whole story, from the war's origins down to Sparta's defeat at Leuctra. In her masterful account, this long and bloody war affected every area of life in Athens, exacerbated divisions between rich and poor in Sparta, and sparked civil strife throughout the Greek world. Yet despite the biting sorrows the fighting occasioned, it remains a gripping saga of plots and counter-plots, murders and lies, missed opportunities and last-minute reprieves, and, as the war's first historian Thucydides had hoped, lessons for a less bellicose future.