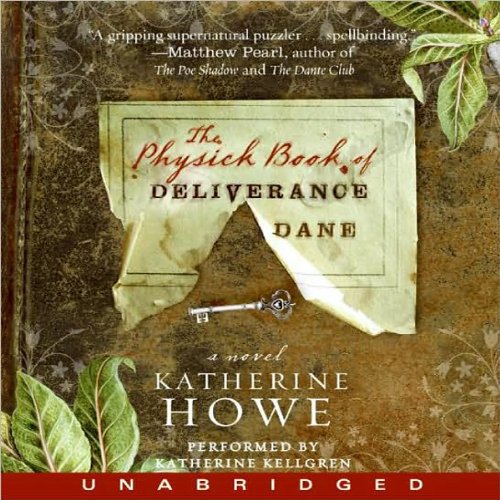 The Physick Book of Deliverance Dane

A darkly quirky tale with enough twists and turns to make a tornado seem like a gentle rainfall, The Physick Book of Deliverance Dane will keep you on the edge of your seat. The suspense is due partly, of course, to debut novelist Katherine Howe's frequent cliffhangers (who knew a story with frequent library scenes could be so compelling!), but it's also due to narrator Katherine Kellgren's expert inflections and pacing. A master of accents and tone, Kellgren's skills are put to good use in this tale that flashes back and forth between the academic world of Cambridge, Massachusetts in 1991 and the Puritanical one of Salem, Massachusetts 300 years earlier. You believe her equally as young Ph.D. candidate Connie Goodwin, embittered sextagenarian academic Manning Chilton, and the cold judges and hysterical accusers of the Salem Witch Trials.

Authors and historians (Howe is both) learned long ago that any account of the Salem Witch Trials offers a mesmerizing narrative. But Howe takes the conceit one step further. As Connie, read by Kellgren in a perfectly-cast sing-songy voice, begins considering her dissertation in American Colonial studies in earnest, she must move to her grandmother's thoroughly unmodern house for the summer. While there, a mysterious key and a piece of paper with the name Deliverance Dane drops out of a family Bible. In flashbacks to the 1690s, we learn of the real Deliverance Dane's life as a town healer and, ultimately, her conviction of practicing witchcraft. Meanwhile, back in the 20th century, we follow Connie's exhaustive search for Deliverance's elusive journal  of recipes, of witchcraft, she doesn't know  first for academic reasons then to save the life of her love interest. Along the way, as Kellgren's narration gets faster, louder, raspier, and stronger, we, like Connie, discover that perhaps there really were some magical women in Salem then, and now. Kelly Marages

Connie is looking forward to starting work on her graduate thesis over the summer, when her mother asks her to sell an abandoned house once owned by her grandmother in Salem, Mass. Relunctantly, Connie moves to the small town and inhabits the crumbling, ancient house, trying to restore it to a semblance of order.

Curious things start to happen when Connie finds the name "Deliverance Dane" on a yellowed scrap of paper inside an old Bible, and begins to have visions of a long ago woman condemned for practicing "physick," or herbal healing, on her neighbors in 1690s Salem.

Interspersed with modern-day sections are chapters on the actual witch trials, revealing the fascinating story of Deliverance Dane and how she got caught up in the tragic events. Connie meets an intriguing young steeplejack named Sam, who's also interested in the history of the area. But just as Connie starts to unravel some of the mysteries surrounding Deliverance's identity, Sam has a horrifying accident, and Connie has to figure out a way to save him that involves an ancient and mystical cure. And to do that, she needs to locate the actual "physick book" once owned by Deliverance Dane herself.

Immediately compelling, with powerful historic insight and detail, The Physick Book of Deliverance Dane is that rare find - a literary first novel with a very commercial premise and pacing.

"In all, a keen and magical historical mystery laced with romance and sly digs at society's persistent underestimation of women." ( Booklist)