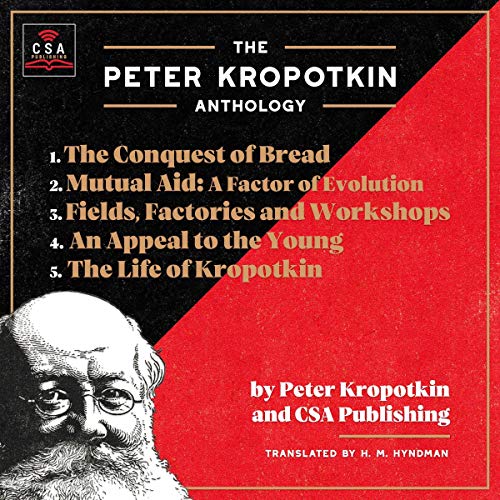 Story one: The Conquest of Bread by Peter Kropotkin

The deficiencies of the economic systems of capitalism and feudalism are proposed to be how the whole of society is kept in poverty and scarcity and, therefore, under the control of the wealthy few. Written in the late 1800s, this prophetic book reveals the truths of the many abuses against human rights caused by the centralization of industry.

Mutual aid, otherwise known as mutually beneficial cooperation, is explored as having an essential role in both the animal kingdom and human society in the survival of everyone. Supporting the theory and foundation for anarchist communism, Peter presents an altruistic view of society, comparing it to the natural laws of biology and evolution.

Focused on the decentralization of industry, Fields, Factories and Workshops connects anarchism with science based on behavioral trends and tendencies of people. He delivers an economical approach to the formation of a stateless society in which all citizens participate in meeting the needs of the community.

Story four: An Appeal to the Young by Peter Kropotkin

Kropotkin’s most famous pamphlet An Appeal to the Young addresses young professionals entering the workforce, encouraging them to join the cause to incite radical societal change.

Story five: The Life of Kropotkin by CSA Publishing

This is an original biography about the prolific thought leader in communist anarchism. Kropotkin tirelessly approached a cause which he believed would benefit humanity and continued to inspire his fellow countrymen to join the movement until his death in 1921.