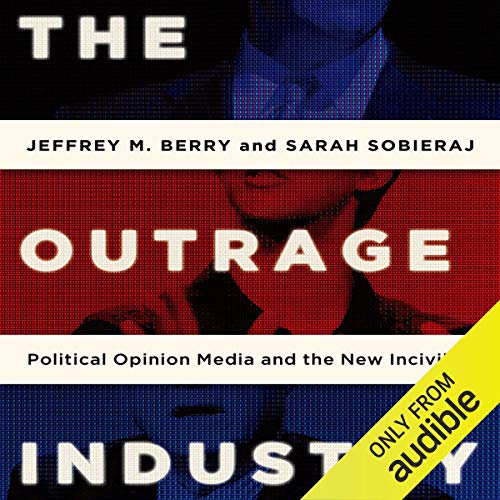 In early 2012, conservative radio host Rush Limbaugh claimed that Sandra Fluke, a Georgetown University law student who advocated for insurance coverage of contraceptives, "wants to be paid to have sex." Over the next few days, Limbaugh attacked Fluke personally, often in crude terms, while a powerful backlash grew. But perhaps what was most notable about the incident was that it wasn't unusual. From Limbaugh's venomous attacks on Fluke to liberal radio host Mike Malloy's suggestion that Bill O'Reilly "drink a vat of poison... and choke to death", over-the-top discourse in today's political opinion media is pervasive.

Anyone who observes the skyrocketing number of incendiary political opinion shows on television and radio might conclude that political vitriol on the airwaves is fueled by the increasingly partisan American political system. But in The Outrage Industry Jeffrey M. Berry and Sarah Sobieraj show how the proliferation of outrage says more about regulatory, technological, and cultural changes, than it does about our political inclinations.

Berry and Sobieraj tackle the mechanics of outrage rhetoric, exploring its various forms, such as mockery, emotional display, fear mongering, audience flattery, and conspiracy theories. They then investigate the impact of outrage rhetoric on a contemporary political landscape that features frequent straight-party voting in Congress. Outrage tactics have also facilitated the growth of the Tea Party, a movement which appeals to older, white conservatives and has dragged the GOP farther away from the demographically significant moderates whose favor it should be courting. Finally, The Outrage Industry examines how these shows sour our own political lives. Drawing from a rich base of evidence, this book forces all of us to consider the negative consequences that flow from our increasingly hyper-partisan political media.