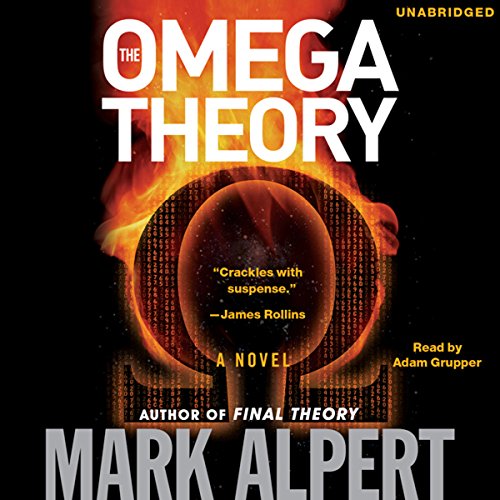 "'The wolf shall dwell with the lamb, and the leopard shall lie down with the kid. And a child shall lead them.' She smiled. Thats you, Michael. Thats why Brother Cyrus needs you. Youre going to help us fulfill the prophecy."

The Omega Theory opens with media reports that, despite U.S. warnings, Iran has tested a nuclear bomb. But the blast from the device is different and far more dangerous than that of any previous nuclear weapon. Surveillance instruments show that for one split second an event occurred that had not taken place since the Big Bang 14 billion years ago.

Meanwhile, science historian David Swift and quantum physicist Monique Reynolds learn that their autistic son, Michael, has been kidnapped by a militant cult called the True Believers. Michael, a descendant of Albert Einstein, has inherited Einsteins remarkable intelligence and is the only person in the world who knows Einstein's last secret: the Final Theory, a set of equations that could explain all the forces of nature. Only those who understand the key to creation could know how to destroy it. The Iranian nuclear blast is a demonstration of this understanding. Soon David and Monique realize their desperate search for Michael is also a desperate race to stop the horrific power of the theory from being unleashed.

Joining forces with FBI Agent Lucille Parker, David and Monique race from the Old City of Jerusalem to the deserts of Turkmenistan to rescue Michael and stop the cults fanatic leader. Their journey proves just how difficult it is to stop those who are willing to die in the name of God.

Praised by best-selling peers such as Douglas Preston and James Rollins, Mark Alpert shows he is at the top of his writing game and the cutting edge of science, seamlessly weaving fact and fiction with nonstop heart-pounding action in this explosive thriller. We will never see our universe in quite the same way again.