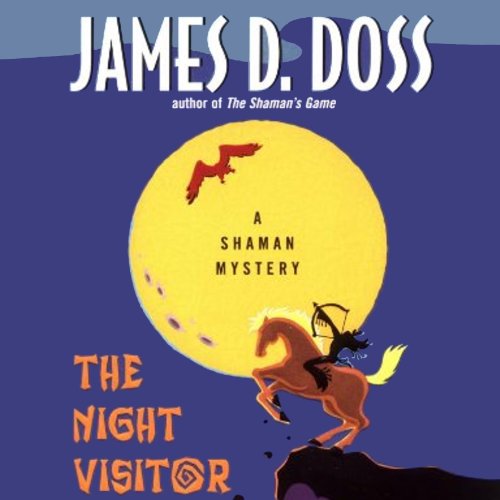 The Night Visitor is a gripping mystical mystery, narrated in an inviting alto lilt by Romy Nordlinger.

Nathan McFain discovers a cryptic pile of unidentified prehistoric bones buried on the property of his Colorado dude ranch. This discovery causes a tizzy amongst archaeologists, scientists, and even the police. Everyone wants to know where these bones came from and what they mean - including an elderly Ute shaman/sorcerer.

But some things are best left undisturbed. For great consequence could befall those who disturb the mighty spirits within things we do not understand.

The morning after the aged Ute shaman receives a perplexing visit from a silent, disheveled matukach "magician," Daisy's neighbor, Nathan McFain, discovers something astonishing buried in the dirt on his foundering Colorado dude ranch: The bones of gargantuan beast from a prehistoric age. It is a find of enormous scientific importance that attracts the attention of a wide variety of individuals: Noted paleontologist Moses Silver and his archaeologist daughter Delia; pillars of the scientific community Robert Newton and Cordell York; an Arkansas sharpie named Flye, an overly interested local antiques dealer… and Charlie Moon of the Southern Ute Police Department. At the McFain spread primarily to keep an eye on the disreputable Flye, Moon is curious about the strange old bones ....and wary as well. For things this ancient and rare have been known to inspire evil deeds in the past, including avarice, mendacity, and murder. And, when one of the prime players in this timeless drama vanishes without a trace, Charlie worries that his greatest fears have been realized. But while Charlie investigates the unexplained disappearance - and a very suspicious death that follows soon after - using rational and accepted police methods, his Aunt Daisy is being drawn by forces preternatural into a grimly related mystery. For craven murder is not the exclusive domain of contemporary Man - and a cry for justice from the past has reached Daisy Perika and tow, extraordinary young girls in her care, ensnaring them all in something old, dark, and dangerous.