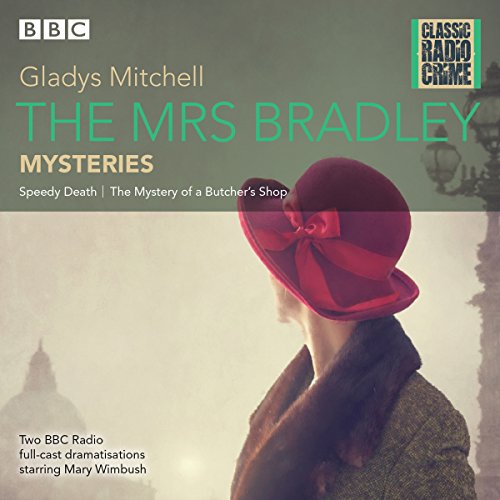 Mary Wimbush stars as unconventional psychoanalyst sleuth Mrs Bradley in these two full-cast dramatisations of stories by Gladys Mitchell. Colourful, cynical, intimidating and extremely intelligent, Mrs Bradley is one of the most unorthodox detectives in the history of Golden Age crime fiction. The heroine of 66 novels by Gladys Mitchell, she has also appeared in several radio adaptations and a BBC TV series starring Diana Rigg.

In these two dramas, she puts her extraordinary mind to work investigating cases of disguise, dismemberment, mayhem and murder. In Speedy Death, a country house in the 1920s is rocked by a murder which takes place in a room which is first locked, then later unlocked. A startling secret is uncovered, and as fingers point and the suspects begin to turn on each other, another death occurs.... The Mystery of a Butcher's Shop sees Mrs Bradley probing some alarming events in the village of Wandles Parva, as Rupert Sethleigh goes missing and a headless body is found jointed in the butcher's shop.

These entertaining dramatisations, first broadcast on BBC Radio 4 in 1990 and 1991, star Mary Wimbush as Mrs Bradley, with Leslie Phillips as Carstairs.