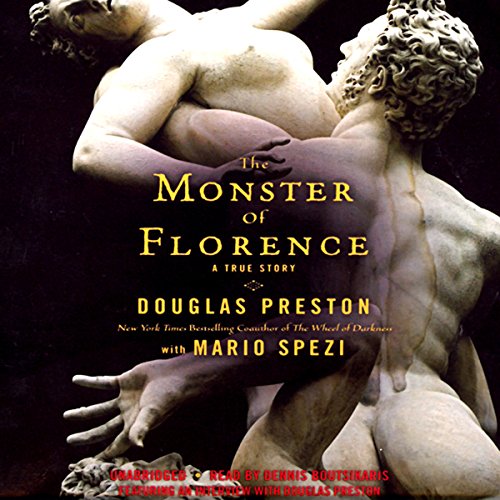 The Monster of Florence

In 2000, Douglas Preston and his family moved to Florence, Italy, fulfilling a long-held dream. They put their children in Italian schools and settled into a 14th-century farmhouse in the green hills of Florence, where they devoted themselves to living la dolce vita while Preston wrote his best-selling suspense novels.

All that changed when he discovered that the lovely olive grove in front of their house had been the scene of the most infamous double-murders in Italian history, committed by a serial killer known only as the Monster of Florence.

Preston, intrigued, joined up with the crack Italian investigative journalist Mario Spezi to solve the case.

The Monster of Florence tells the true story of their search for - and identification of - a likely suspect, and their chilling interview with that man.

Then, in a strange twist of fate, Preston and Spezi themselves become targets of the police investigation into the murders. Preston has his phone tapped and is interrogated by the police, accused of perjury, planting false evidence and being an accessory to murder - and told to leave the country. Spezi fares worse: he is thrown into Italy's grim Capanne prison, accused of being the Monster of Florence himself.

The Monster of Florence, which reads like one of Preston's thrillers, tells a remarkable and harrowing story involving murder, mutilation, suicide, carnival trials, voyeurism, princes and palaces, body parts sent by post, séances, devil worship and Satanic sects, poisonings and exhumations, Florentine high fashion houses, and drunken peasants. And at the center of it are Preston and Spezi, caught in the crossfire of a bizarre prosecutorial vendetta.