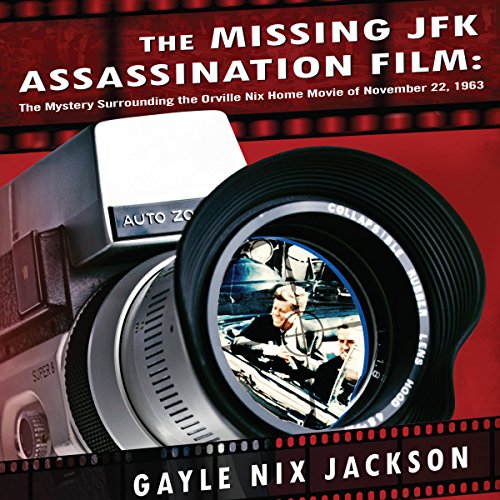 The Missing JFK Assassination Film is not the typical JFK assassination book. This book does not attempt to answer the question of who killed John F. Kennedy; instead it addresses why we should question the actions of those involved and why the truth was withheld from the people. Though copies of Orville Nix's film exist, the original film is missing. Why? The FBI confiscated Orville's camera for several months, then returned it in pieces. Were these actions sinister, or were they just examples of governmental incompetence?

The Missing JFK Assassination Film exposes information about the House Select Committee staff's involvement in the missing film. Author Gayle Nix Jackson's interviews with people who were close to Orville and the film will shed light on the government's involvement with the filmmaker.

Gayle Nix Jackson is the granddaughter of Orville Nix. As his eldest granddaughter, Nix Jackson shares experiences growing up with her beloved grandfather and how his views changed after that fatal day. Hearing his story precipitated the quest Jackson is still on to find the film. Her grandfather was there that day for a reason, and if the original Nix film could be located, modern-day technology could determine if there was indeed another person behind the stockade fence or not. Questions still abound today as to whether or not the film was altered. Finding the original Nix film would answer one of the most enduring questions related to this horrific event: Was there a conspiracy to kill John F. Kennedy on November 22, 1963?

Skyhorse Publishing, as well as our Arcade imprint, are proud to publish a broad range of books for listeners interested in history - books about World War II, the Third Reich, Hitler and his henchmen, the JFK assassination, conspiracies, the American Civil War, the American Revolution, gladiators, Vikings, ancient Rome, medieval times, the old West, and much more. While not every title we publish becomes a New York Times best seller or a national best seller, we are committed to books on subjects that are sometimes overlooked and to authors whose work might not otherwise find a home.