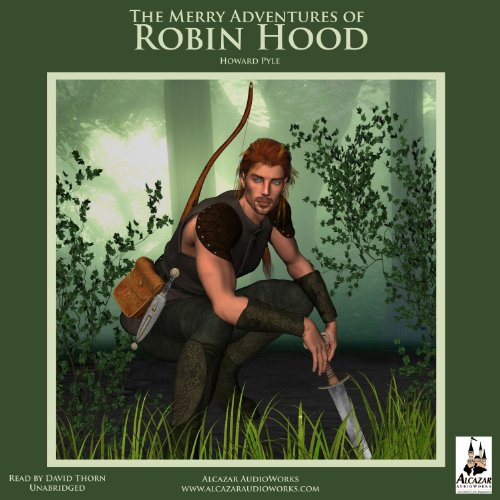 The Merry Adventures of Robin Hood

Howard Pyle's exciting and hilarious tales of Robin Hood and his merry band of Outlaws who reigned over Sherwood Forest doing many good deeds for the poor, and deserved misdeeds for the pompous and haughty rich.

Chapter 01: How Robin Hood Came to Be an Outlaw

Chapter 02: Robin Hood and the Tinker

Chapter 04: Will Stutely Rescued by His Companions

Chapter 07: How Little John Lived at the Sheriff's

Chapter 08: Little John and the Tanner of Blyth

Chapter 09: Robin Hood and Will Scarlet

Chapter 10: The Adventure with Midge the Miller's Son

Chapter 15: How Sir Richard of the Lea Paid His Debts

Chapter 19: The Chase of Robin Hood

Howard Pyle was born on March 5, 1853 in Wilmington, Delaware. From the time he was a very small boy he loved pictures, especially the pictures in storybooks. Among his favorites were Grimm’s German Fairy Tales and Arabian Nights.

At the age of twenty-one, Pyle began to contribute illustrations and fables to St. Nicholas magazine and later went on to write and illustrate books for children. His first was The Merry Adventures of Robin Hood in 1883. Many more books followed. He also taught illustration at the Drexel Institute in Philadelphia and later set up his own art school in Wilmington. He died on November 9, 1911, in Florence, Italy.