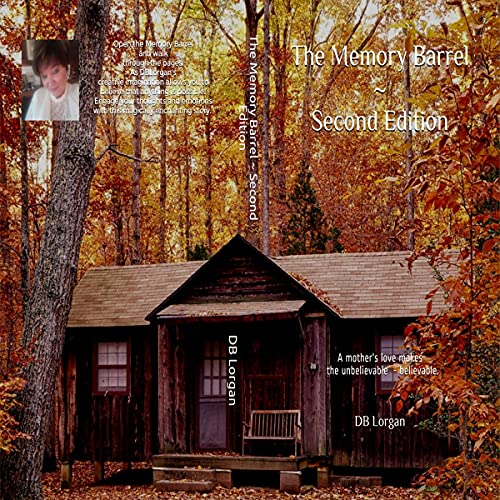 Open the Memory Barrel, and listen to the audio as DBLorgan's creative imagination allows you to believe that anything is possible. Engage your thoughts and emotions with this magically enchanting story shared in the most unusual way.

I began to write in journals in 2002. I had heard Oprah say it was good for you. So I did. Just for me, well, maybe for my children to read later in life.

As I was writing, I was so uncomfortable doing this, since I felt I was living in the sadness instead of coming out of it.

I was given the thought, "Make it into a story." Not an autobiography, but a story of a woman somewhat similar to me but not me. The story took a life of its own, having her travel and touching lives all over the world.

All authors do put a piece of themselves within their books.

And as long as I was having fun doing it. I knew I wanted to make it creative and magical. I had never written a book before. I am not sure if I even thought I would publish it. That is another story of the magic of this book. I just kept writing and laughing as the twist and turns were given to me through my pencil. The words flowed onto the paper.

Debra's story and her enjoyment of life to meeting a special man from Scotland and the Isle of Skye. He lived in the mountains of New York when he was stateside. It was just given to me. Such a lovely story was being created that surpassed time and realms. What fun!

I must add here as well that I believe in angels and guides. Since I am Irish and Iroquois, well, that should tell you a lot about me.

This is the "are you kidding me" moment for you.

This is where the angels played with me beyond what I ever imagined. After 11 years of my book's beginning, they wrote it to releasing The Memory Barrel in 2010.

They brought me to a man who is of Scottish heritage in 2012. And yes, he lived in the mountains of New York when we met, which is such a fun story to tell! I asked him, hearing he was Scottish, "Have you ever been to the Isle of Skye?" His reply: "Yes, twice!" I almost fell off my chair. He couldn't imagine, nor had he ever had someone ask him this.

So the story continues. I will tell it to you in my gatherings. It is sure to make you believe that anything is possible if the book didn't allow you to see that already.

Truly, you have never experienced a book such as this, nor will ever again. It comes alive.... It takes you within the story as it did me....

It's truly "an angel thing".