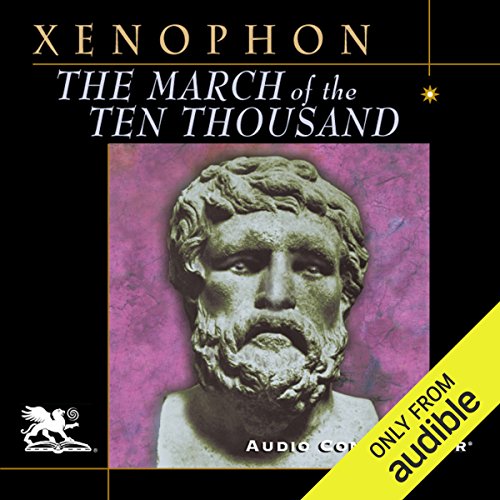 The March of the Ten Thousand

Translated by W. E. D. Rouse, The March of the Ten Thousand is one of the most admired and widely read pieces of ancient literature to come down to us. Xenophon employs a very simple, straightforward style to describe what is probably the most exciting military adventure ever undertaken. When Cyrus, brother to the Great King of Persia, attempts to overthrow his feckless sibling in 401 B.C., he employs a Greek mercenary army of 10,000 hoplites as the core of his rebellious force. Xenophon, who seeks the advice of Socrates before joining, is among the common soldiers. Inexorably, Cyrus and his huge army march southward 1,500 miles from the coast of Ionia all the way to Babylon, and there give battle to Artaxerxes, the Great King. Although the battle is soon decided in favor of Cyrus, the would-be usurper is killed while in pursuit of the king. Meanwhile, the Greeks are victorious on their part of the battlefield and await the return of Cyrus and his instructions.

By the next morning, they realize that Cyrus is dead and that his allies have melted away in the night, leaving them alone trapped behind enemy lines within a few miles of the Persian capital. And only a few miles distant lies an enormous Persian army with vengeance in mind. Despair deepens when the Greek officer corps is treacherously murdered during peace talks. Alone, leaderless and hopelessly outnumbered, the Greeks nevertheless elect new officers.

Xenophon steps into the pages of history with his magnificent rallying speeches and selfless acts of courage. Follow one of history's most spirited bands of soldiers as they fight and maneuver their way through 1,500 miles of hostile territory seething with adversaries. It is an epic of courage, faith and democratic principle.