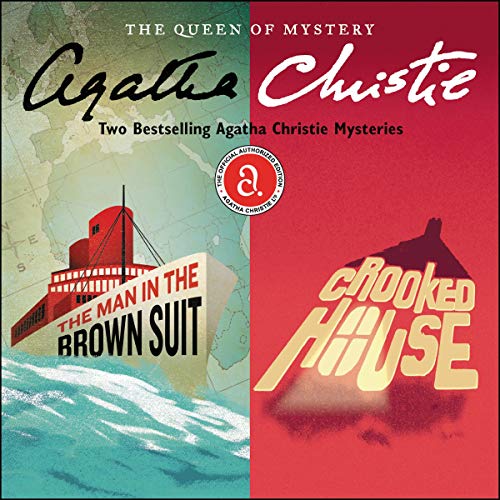 The Man in the Brown Suit & Crooked House

The Man in the Brown Suit is Agatha Christie at her best, as a young woman makes a dangerous decision to investigate a shocking “accidental” death she witnesses at a London tube station.

Pretty, young Anne came to London looking for adventure. In fact, adventure comes looking for her - and finds her immediately at Hyde Park Corner tube station. Anne is present on the platform when a thin man, reeking of mothballs, loses his balance and is electrocuted on the rails.

The Scotland Yard verdict is accidental death. But Anne is not satisfied. After all, who was the man in the brown suit who examined the body? And why did he race off, leaving a cryptic message behind: "17-122 Kilmorden Castle"?

Described by the Queen of Mystery herself as one of her favorites of her published works, Crooked House is a classic Agatha Christie thriller revolving around a devastating family mystery.

The Leonides are one big happy family living in a sprawling, ramshackle mansion. That is until the head of the household, Aristide, is murdered with a fatal barbiturate injection.

Suspicion naturally falls on the old man’s young widow, 50 years his junior. But the murderer has reckoned without the tenacity of Charles Hayward, fiancé of the late millionaire’s granddaughter.

“Writing Crooked House was pure pleasure and I feel justified in my belief that it is one of my best.” (Agatha Christie)

I've never read these stories but both are great. Great production and reading. I'm recommending it for sure