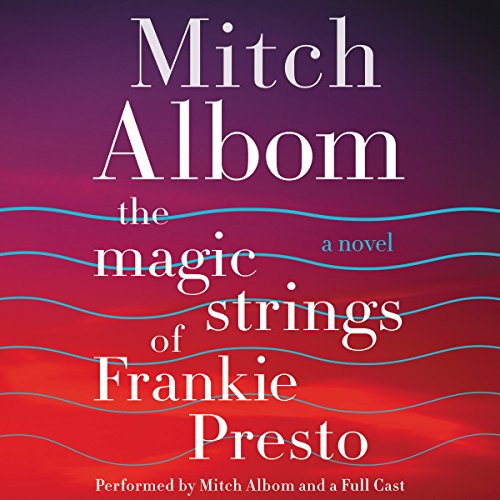 The Magic Strings of Frankie Presto

Mitch Albom creates his most unforgettable fictional character - Frankie Presto, the greatest guitarist ever to walk the Earth - in this magical novel about the bands we join in life and the power of talent to change our lives.

It's an epic story of the greatest guitar player ever to live and the six lives he changed with his magical blue strings.

In Albom's most sweeping novel yet, the voice of Music narrates the tale of its most beloved disciple, young Frankie Presto, a war orphan raised by a blind music teacher in a small Spanish town. At nine years old, Frankie is sent to America in the bottom of a boat. His only possession is an old guitar and six precious strings.

But Frankie's talent is touched by the gods, and his amazing journey weaves him through the musical landscape of the 20th century, from classical to jazz to rock and roll, with his stunning talent affecting numerous stars along the way, including Hank Williams, Elvis Presley, Carole King, Wynton Marsalis, and even KISS.

Frankie becomes a pop star himself. He makes records. He is adored. But his gift is also his burden, as he realizes that through his music he can actually affect people's futures - with one string turning blue whenever a life is altered.

At the height of his popularity, Frankie Presto vanishes. His legend grows. Only decades later does he reappear - just before his spectacular death - to change one last life.

With its Forrest Gump-like romp through the music world, The Magic Strings of Frankie Presto is a classic in the making. A lifelong musician himself, Mitch Albom delivers a remarkable novel infused with the message that "everyone joins a band in this life", and those connections change us all.

"The narrative ensemble, which includes the author, is an inspired choice for this production. Their collective talents prove equal to a story with an extensive cast and a magical blend of realism and fantasy.... The fortunate listener who can briefly suspend disbelief will be rewarded with one of this season's true audio gems." (AudioFile)