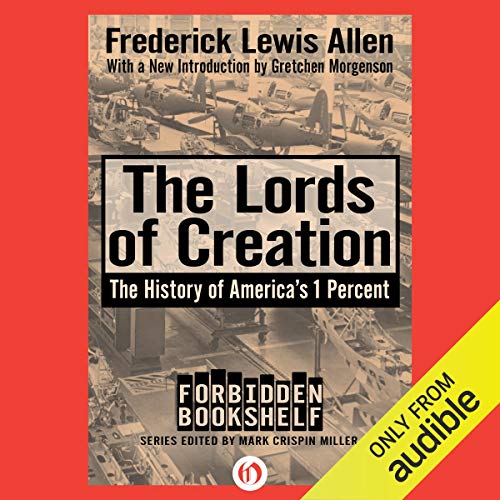 The Lords of Creation

The Lords of Creation

An acclaimed classic detailing the economic history of America in the late 19th and early 20th centuries and exposing the capitalist giants who changed the world. Frederick Lewis Allen’s insightful financial history of the United States - from the late 1800s through the stock market collapse of 1929 - remains a seminal work on what brought on America’s worst economic disaster: the Great Depression. In the decades following the Civil War, America entered an era of unprecedented corporate expansion, with ultimate financial power in the hands of a few wealthy industrialists who exploited the capitalist system for everything it was worth. The Rockefellers, Fords, Morgans, and Vanderbilts were the "lords of creation" who, along with like-minded magnates, controlled the economic destiny of the country, unrestrained by regulations or moral imperatives. Through a combination of foresight, ingenuity, ruthlessness, and greed, America’s giants of industry remolded the US economy in their own preferred image. In so doing, they established their absolute power and authority, ensuring that they - and they alone - would control the means of production, transportation, energy, and commerce - thereby setting the stage for the most devastating global financial collapse in history.

As Gretchen Morgenson thoughtfully states in her introduction, "It is not immediately clear why the frequency and severity of financial scandals is increasing in the United States. What is clear is that we need to understand the origins of these disasters, as well as the policies and people that bring them on.... While distant actions may seem unrelated to current events, rereading about the past almost always provides surprising insights into the present."