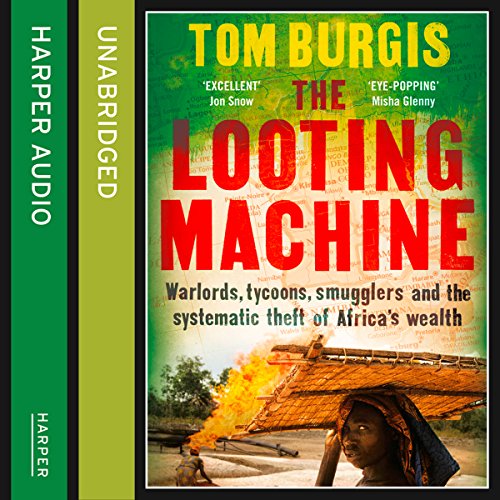 The Looting Machine: Warlords, Tycoons, Smugglers and the Systematic Theft of Africa's Wealth

A shocking investigative journey into the way the resource trade wreaks havoc on Africa, The Looting Machine explores the dark underbelly of the global economy.

Africa: the world's poorest continent and arguably its richest. While accounting for just 2 percent of global GDP, it is home to 15 percent of the planet's crude oil, 40 percent of its gold, and 80 percent of its platinum. A third of the Earth's mineral deposits lie beneath its soil. But far from being a salvation, this buried treasure has been a curse.

The Looting Machine takes you on a gripping and shocking journey through anonymous boardrooms and glittering headquarters to expose a new form of financialized colonialism. Africa's booming growth is driven by the voracious hunger for natural resources from rapidly emerging economies such as China.

But in the shadows a network of traders, bankers, and corporate raiders has sprung up to grease the palms of venal local political elites. What is happening in Africa's resource states is systematic looting. In country after country across the continent, the resource industry is tearing at the very fabric of society. But, like its victims, the beneficiaries of this looting machine have names.

For six years Tom Burgis has been on a mission to expose corruption and give voice to the millions of Africans who suffer the consequences of living under this curse. Combining deep reporting with an action-packed narrative, he travels to the heart of Africa's resource states, meeting a warlord in Nigeria's oil-soaked Niger Delta, and crossing a warzone to reach a remote mineral mine in Eastern Congo.

The result is a blistering investigation that throws a completely fresh light on the workings of the global economy and will make you think twice about what goes into the mobile phone in your pocket and the tank of your car.

"An excellent book. Despite Africa's impressive economic 5% growth rate, Tom Burgis ensures that we don't stop wondering who does what in Africa and how we are all party to what Western 'investors' are up to. The postcolonial corruption and rape of African resource to the benefit of Western consumption is still alive and horribly well." (Jon Snow)
"Tom Burgis has managed to uncover a system responsible for the wholesale looting of Africa's mineral resources for the benefit of oligarchic and state interests around the world. French, Chinese, Americans, Russians, Israelis, Brits, Brazilians, not to mention small but rapacious African elites are all involved in pillaging Africa's natural resources to line their pockets with unbelievable sums. Burgis, a gifted young journalist with the Financial Times, has tracked down all these characters across some of Africa's most dangerous hotspots and beyond in Asia, Europe, and America. The reporting is vivid, eye-popping, and even at times very funny." (Misha Glenny, author of McMafia)