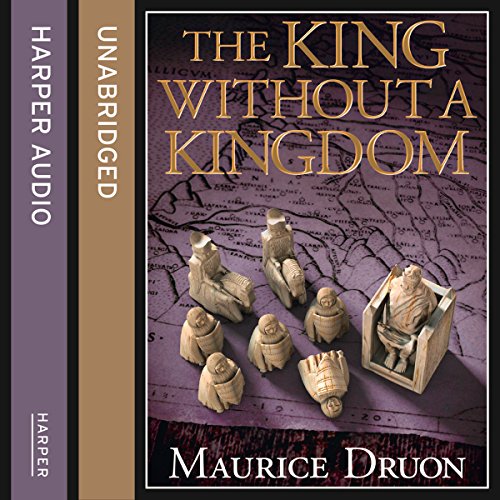 The King Without a Kingdom (The Accursed Kings, Book 7)

‘This was the original Game Of Thrones' George R.R. Martin.

Available for the first time in English, The King Wihout a Kingdom is the seventh and final volume of The Accursed Kings series.

The reign of the Capetian kings has ended and John II, ‘The Good', second of the Valois dynasty, has taken the throne.

Under his leadership the Hundred Years War, one of the longest and bloodiest conflicts in history, escalates and England and France begin to tear each other apart.Cardinal Périgord, narrating the drama, shows us a monarch as vain and cruel as he is incompetent.

Under his turbulent reign, warring factions plunder the land, famine threatens the people and the Black Death spreads far and wide. France is bleeding to death around the new king.

"Iron kings and strangled queens, battles and betrayals, lies and lust, the curse of the Templars, the doom of a great dynasty - and all of it (well, most of it) straight from the pages of history, and believe me, the Starks and the Lannisters have nothing on the Capets and Plantagenets. Whether you are a history buff or a fantasy fan, Druon's epic will keep you turning pages. This was the original game of thrones" (George R.R. Martin)
"Blood-curdling tale of intrigue, murder, corruption and sexual passion" ( The Sunday Times)
"Dramatic and colourful as a Dumas romance but stiffened by historical accuracy and political insight" ( The Sunday Times)
"Barbaric, sensual, teeming with life, based in wide reading and sound scholarship…among the best historical novels" ( The Times Literary) Supplement