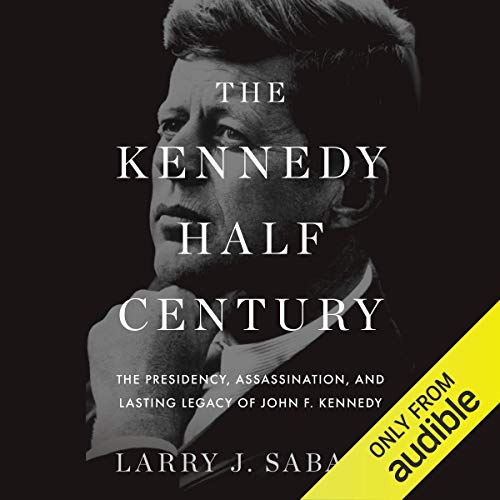 The Kennedy Half Century

The Kennedy Half Century

John F. Kennedy died half a century ago - yet because of his extraordinary promise and untimely death, his star still resonates strongly. On the anniversary of his assassination, celebrated political scientist and analyst Larry J. Sabato - himself a teenager in the early 1960s and inspired by JFK and his presidency - explores the fascinating and powerful influence he has had over five decades on the media, the general public, and especially on each of his nine presidential successors.

A recent Gallup poll gave JFK the highest job approval rating of any of those successors, and millions remain captivated by his thousand days in the White House. For all of them, and for those who feel he would not be judged so highly if he hadn't died tragically in office, The Kennedy Half-Century will be particularly revealing. Sabato reexamines JFK's assassination using heretofore unseen information to which he has had unique access, then documents the extraordinary effect the assassination has had on Americans of every modern generation through the most extensive survey ever undertaken on the public's view of a historical figure. The full and fascinating results, gathered by the accomplished pollsters Peter Hart and Geoff Garin, paint a compelling portrait of the country a half-century after the epochal killing. Just as significantly, Sabato shows how JFK's presidency has strongly influenced the policies and decisions - often in surprising ways - of every president since.

Among the hundreds of books devoted to JFK, The Kennedy Half-Century stands apart for its rich insight and original perspective. Anyone who reads it will appreciate in new ways the profound impact JFK's short presidency has had on our national psyche.