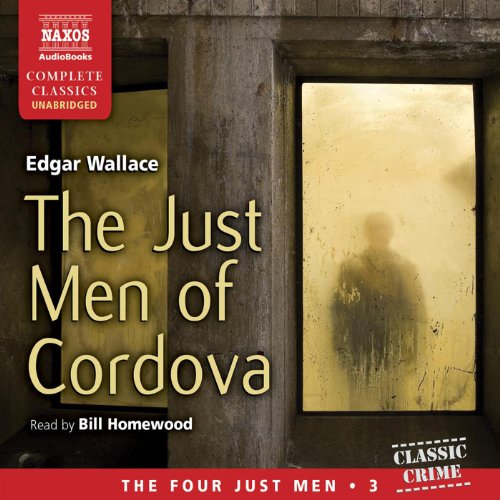 The Just Men of Cordova

Bill Homewood narrates this classic tale of mystery and suspense with a pace like a marching army. He uses emphasis and pauses to build tension in this world of danger and intrigue. His expertise in performing accents and creating characters with sublime ease makes the story come alive. The tension in his voice matches the growing conflict between the hunted and the hunters. Weaving the descriptive details with ever growing tension, Homewood makes listening to this tale a delightfully chilling experience.

In his Four Just Men series, Edgar Wallace comes up with something different: the ‘villains’ are not necessarily bad people, and the pursuers of justice, the Four Just Men, as they call themselves, are acting outside the law. They argue that their actions are for the public good, and dispassionately eke the ultimate revenge — death — on their victims. In their turn, the Four Just Men are pursued by the police, but somehow remain our heroes.

In The Just Men of Cordova, written in 1917, the Four move into the treacherous, aristocratic world of gambling, horse-racing and high finance. It seems that police services, even governments, have no power to control this world, where blackmail, poison and murder are commonplace. The Four, working outside the law, take it upon themselves to clean things up in their own way.