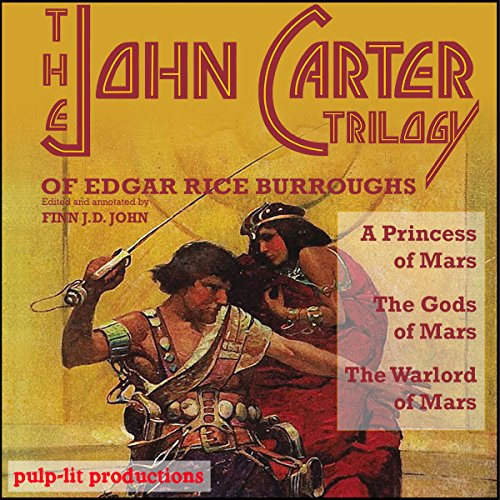 The first of these novels, A Princess of Mars, was Burroughs' first book, and he wrote the next two novels in quick succession. Together they tell the story of John Carter of Mars - how he came to Mars, met the love of his life, and quickly found himself occupied full-time defending her and saving his adopted planet from interplanetary evildoers.

This trilogy opened the doors of popular science fiction to an entire nation and world. It launched the original pulp science fiction storyworld and series, often imitated but never duplicated, and has inspired four generations of young sci-fi and fantasy writers, artists, moviemakers and videogame designers.

And, of course, it's a ripping great story.

This Pulp-Lit Press Annotated Omnibus Edition takes those three novels together as a coherent story. Each is gracefully and unobtrusively annotated, to help the modern reader put it in the proper literary and historical context for maximum reading enjoyment. All annotations are presented together in a single chapter, easily skipped by readers who prefer to get on with the story.

I own about 50 audiobooks, but have listened to many many more over the years. This John C. trilogy is probably the worst narration job I have ever listened to. The narrator's voice is squeakish and he reads the story like a newspaper clip. No excitement. No real disdingu. between the characters. A real boring, awful and squealing read down of an otherwise fantastic story. No one wants a John Carter that sounds like a 15 year old weazel....