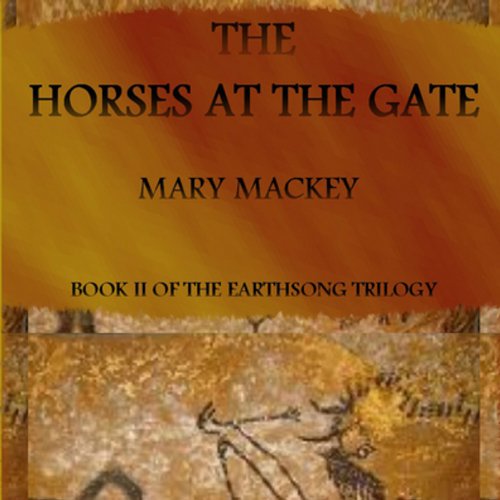 The Horses at the Gate

The Horses at the Gate

In Horses at the Gate, the second book of the Earthsong Trilogy, Mary Mackey enchants listeners with an adventure tale set in Neolithic Europe.  Based on the works of archaeologist Marija Gimbutas, Mackey's epic weaves together historical facts with fantastical elements, complete with goddesses, omens, sacrifices, and battles between good and evil. Abby Craden's heartfelt performance breathes life into this ancient land as she believably embodies the spirit of each character she plays. Together, Mackey and Craden make this audiobook powerful storytelling at its best.

The sequel to Mackey's Year the Horses Came transports us to northeastern Rumania and western Ukraine some six to eight thousand years ago. Drenched in blood sacrifice and hatred, the villain Changar vows revenge against Marrah and her gentle lover Stavan - a prehistoric New Age man and rightful heir to the Hansi throne, which has been usurped by the dead chief Zuhan's evil bastard son Vlahan, a devotee of rape and destruction. In the spirit of ancient adventure novels, this fictional clash of good and evil abounds with visions, omens, and goddesses and, like its predecessor, is based on archaeologist Marija Gimbutas' goddess-centered studies of old Europe. With an ending that readies listeners for another in a series, it deserves a place on the shelves next to the works of Jean Auel.

"[D]eserves a place on the shelves next to the works of Jean Auel." (Booklist
A heart-pounding evocation whose lessons lie in the hearts of the characters." (Thomas Moore, author of Care of the Soul)
"Literary grace and powerful storytelling." (Theodore Roszak)