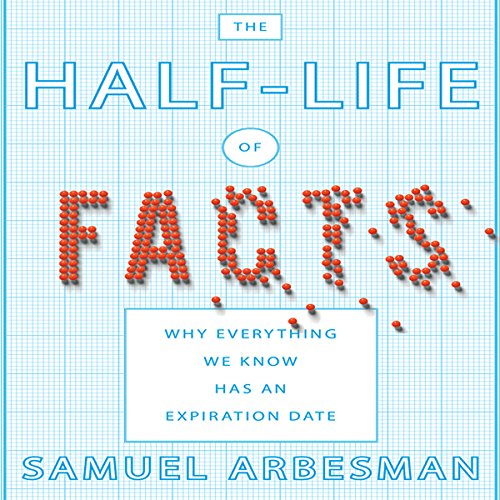 The Half-life of Facts

New insights from the science of science....

Facts change all the time. Smoking has gone from doctor recommended to deadly. We used to think the Earth was the center of the universe and that Pluto was a planet. For decades, we were convinced that the brontosaurus was a real dinosaur. In short, what we know about the world is constantly changing. But it turns out there’s an order to the state of knowledge, an explanation for how we know what we know.

Samuel Arbesman is an expert in the field of scientometrics - literally the science of science. Knowledge in most fields evolves systematically and predictably, and this evolution unfolds in a fascinating way that can have a powerful impact on our lives. Doctors with a rough idea of when their knowledge is likely to expire can be better equipped to keep up with the latest research. Companies and governments that understand how long new discoveries take to develop can improve decisions about allocating resources. And by tracing how and when language changes, each of us can better bridge generational gaps in slang and dialect. Just as we know that a chunk of uranium can break down in a measurable amount of time - a radioactive half-life - so too any given field’s change in knowledge can be measured concretely.

We can know when facts in aggregate are obsolete, the rate at which new facts are created, and even how facts spread.

Arbesman takes us through a wide variety of fields, including those that change quickly, over the course of a few years, or over the span of centuries. He shows that much of what we know consists of “mesofacts” - facts that change at a middle timescale, often over a single human lifetime. Throughout, he offers intriguing examples about the face of knowledge: what English majors can learn from a statistical analysis of The Canterbury Tales, why it’s so hard to measure a mountain, and why so many parents still tell kids to eat their spinach because it’s rich in iron. The Half-life of Facts is a riveting journey into the counterintuitive fabric of knowledge. It can help us find new ways to measure the world while accepting the limits of how much we can know with certainty.

“How many chromosomes do we have? How high is Mount Everest? Is spinach as good for you as Popeye thought - and what scientific blunder led him to think so in the first place? The Half-life of Facts is fun and fascinating, filled with wide-ranging stories and subtle insights about how facts are born, dance their dance, and die. In today’s world, where knowledge often changes faster than we do, Samuel Arbesman’s new audiobook is essential listening.” (Steven Strogatz, professor of mathematics, Cornell University, and author of The Joy of X)