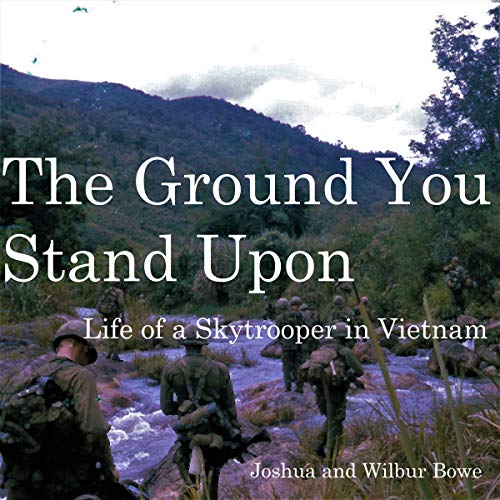 The Ground You Stand Upon: Life of a Skytrooper in Vietnam

Sent into the deadly Central Highlands of Vietnam, a true story of my dad and the skytroopers of Alpha Company, 5th Battalion, 7th Cavalry from 1966 to 1967. My father was living on his family’s farm when he was drafted in 1965 and assigned to Alpha Company, 5th Battalion, 7th Calvary. The 5/7th Cavalry was formed as a brand-new battalion in order to fill out the 1st Air Cavalry Division’s 3rd Brigade. The young men of the battalion were drafted together in 1965 as the build-up of regular Army forces in Vietnam had just begun. Together, these impossibly young men would be trained in airmobile infantry tactics and become what were known as “skytroopers”. In the depths of the jungle, they would learn what “search and destroy” meant and face the reality of this new war.

The story features many of the letters and photos my dad sent home from the war zone. The photos can be viewed on the PDF available with the audiobook. His dispatches were sent from some of the most remote valleys and outposts in Vietnam, written under the most austere of conditions, often scribbled in haste before another mission, or by flashlight, under a poncho in the rain. They would travel over 8,000 miles across the ocean, to be placed in a mailbox that stood across from a farmhouse, along a rural county road in Wisconsin. Many former skytroopers of Alpha Company were interviewed for this story, and their personal accounts recall much of the humor and friendship they shared, along with the sadness and tragedy that would accompany a year spent in the jungles of Vietnam. The story also draws upon the 5/7th Cavalry’s daily situation reports for each day of the battalion’s first year in Vietnam.

This is their story, told in great detail from their time spent training together at Fort Carson - through their historic journey across the ocean aboard the USNS Gaffey, where they would encounter a massive typhoon - through their many battles fought together in Vietnam - and eventually, their final patrol.

PLEASE NOTE: When you purchase this title, the accompanying PDF will be available in your Audible Library along with the audio

Das sagen andere Hörer zu The Ground You Stand Upon: Life of a Skytrooper in Vietnam