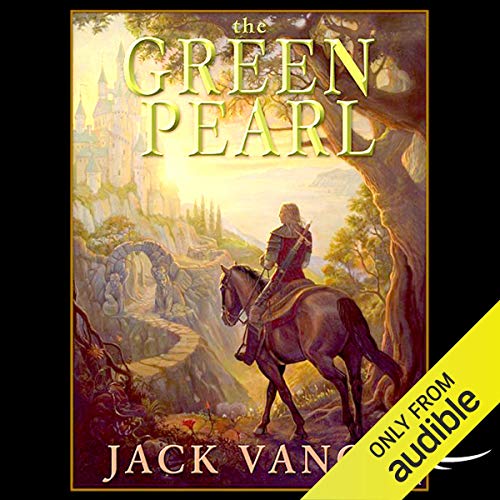 In The Green Pearl, King Aillas of Troicinet defends the peace of the Elder Isles against both the Ska marauders who once enslaved him and the wicked King Casmir. While organizing the unruly barons in the frontiers of his land, Aillas goes out of his way to capture the lovely Ska noblewoman who once stung him with her disregard. When he gets separated from his men, his dream of forcing the lady's recognition becomes the toil of dragging a defiant captive across lands governed by Casmir's henchmen. Meanwhile, the world of magic has gone on the move. The concentrated malice of the witch Desmëi has manifested as a green pearl, breeding lust and envy and death; and a sorcerer in Casmir's employ abducts the princess Glyneth, in a bid to draw Aillas and friends on a hopeless rescue mission across a bizarre and deadly alternate world.

A masterpiece of romantic, picaresque adventure, The Green Pearl extends the epic founded with Lyonesse: Suldrun's Garden and concluded in the World Fantasy Award-winning Madouc

“(Vance) gives you glimpses of entire worlds with just perfectly turned language. If he’d been born south of the border, he’d be up for a Nobel Prize.” (Dan Simmons)
“Vance has the narrative force, the willingness to look very coldly at violence and cruelty, to not shy away…. He has an amazing ear and writes a beautiful sentence.” (Michael Chabon)