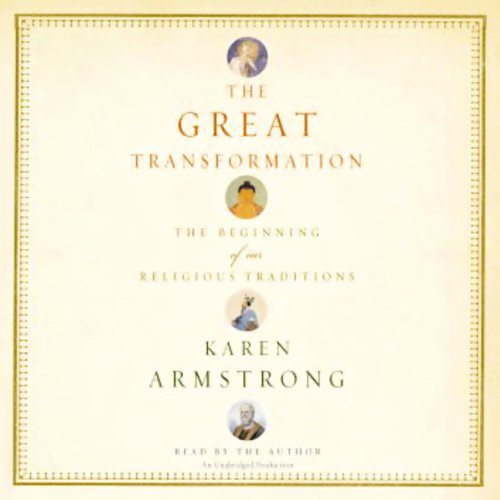 From one of the world's leading writers on religion and the highly acclaimed author of the best-selling A History of God, The Battle for God, and The Spiral Staircase, comes a major new work: a chronicle of one of the most important intellectual revolutions in world history and its relevance to our own time.

In one astonishing, short period, the ninth century BCE, the peoples of four distinct regions of the civilized world created the religious and philosophical traditions that have continued to nourish humanity into the present day: Confucianism and Daoism in China; Hinduism and Buddhism in India; monotheism in Israel; and philosophical rationalism in Greece. Historians call this the Axial Age because of its central importance to humanity's spiritual development. Now, Karen Armstrong traces the rise and development of this transformative moment in history, examining the brilliant contributions to these traditions made by such figures as the Buddha, Socrates, Confucius, and Ezekiel.

Armstrong makes clear that despite some differences of emphasis, there was remarkable consensus among these religions and philosophies: each insisted on the primacy of compassion over hatred and violence. She illuminates what this "family" resemblance reveals about the religious impulse and quest of humankind. And she goes beyond spiritual archaeology, delving into the ways in which these Axial Age beliefs can present an instructive and thought-provoking challenge to the ways we think about and practice religion today.

The Great Transformation is a revelation of humankind's early shared imperatives, yearnings, and inspired solutions, as salutary as it is fascinating.

"She chronicles these tales in dazzling prose with remarkable depth and judicious breadth." ( Publishers Weekly)