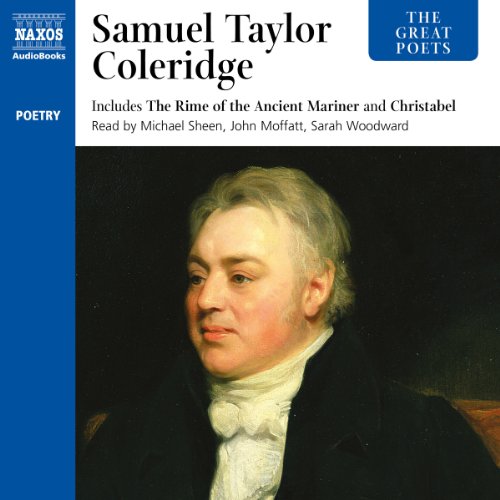 This unique recording features an assortment of actors reciting Coleridge's most famous works, all gems of English poetry. Acclaimed actor Michael Sheen does a superb and truly harrowing recitation of "The Rime of the Ancient Mariner", while Sarah Woodward is a sensuous Christabel. “Frost at Midnight” is infused with a sense of dark glamor, while “Love” is haunting and profound. Overall, the performers here do an excellent job showcasing the beauty of Coleridge's words and the depths of his emotions. An excellent way to experience the work of this deeply imaginative and inventive poet.

Samuel Taylor Coleridge, in collaboration with his friend, William Wordsworth, revolutionized English poetry. In 1798 they produced their Lyrical Ballads, poems of imagination and reflection using "the language of men" - pointing the way forward for a generation of Romantic poets.

Coleridge’s addiction to opium affected his poetic output, and yet the handful of poems he did produce were innovative. These ranged from the quietly conversational to the wildly imagined, and include two of the greatest in English literature: "Kubla Khan" and "The Rime of the Ancient Mariner".

Hollywood actor Michael Sheen reads "The Rime of the Ancient Mariner", in this collection, which is part of the Naxos AudioBooks The Great Poets series. This popular anthology also contains Coleridge's other major narrative poem "Christabel", as well as "Kubla Khan", "Love", "Frost at Midnight", and "The Lime-Tree Bower My Prison".