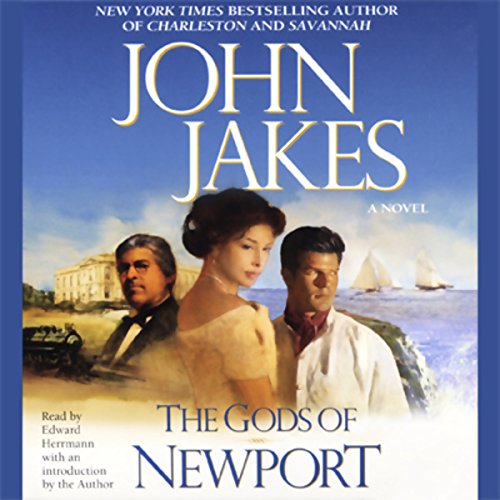 The Gods of Newport

In the late 19th century, Newport, Rhode Island, was a cauldron of undeclared class warfare, where reputations were made and lost in a whirlwind of parties and fancied slights. It was also a place where huge mansions called "cottages" arose and where ¿ amid the glamour of yacht races, tennis matches, and costume balls ¿ depression, even madness, sometimes followed social failure.

In 1893, Sam Driver, railroad mogul and one of the few surviving robber barons of the lawless years after the Civil War, knocks on the door of fabled Newport, along with his daughter, Jenny, who is determined not to be turned away a second time.

Previously, Sam's new money was considered tainted by his rapacious reputation and his dealings with some of the most dishonest businessmen of the era. The Drivers find that some who know Sam's past won't let it rest. One enemy with a pedigree of wealth and position vows to slam every door in Sam's face.

But Sam plunges in, determined to win a place in the strange, rarefied world of Newport's brief summer season, presided over by social gadflies Ward McAllister and the androgynous Harry Lehr, both of whom will assist the Drivers ¿ for a price. Sam's daughter wants the best that Newport offers but finds herself drawn into a dangerous romance with an impoverished young Irishman.

The Gods of Newport brings this gilded age of excess to thrilling life. It was a time and place whose extremes of greed, conspicuous consumption, and social striving have an astonishing resonance and relevance for the America we see around us today.

"Jakes is a fluent storyteller, and his meticulous reconstruction of fin-de-siècle excess will have fans savoring the lavish details of jewelry, fashion, food and follies." (Publishers Weekly)
"The prolific Jakes scores with a lush new historical saga set on the glamorous, windswept shores of late-nineteenth-century Newport, Rhode Island, the summer playground of the fabulously wealthy....Jakes displays his characteristic flair for class melodrama....He has fashioned yet another breezy...piece of historical fiction, sure to please his many fans." (Booklist)