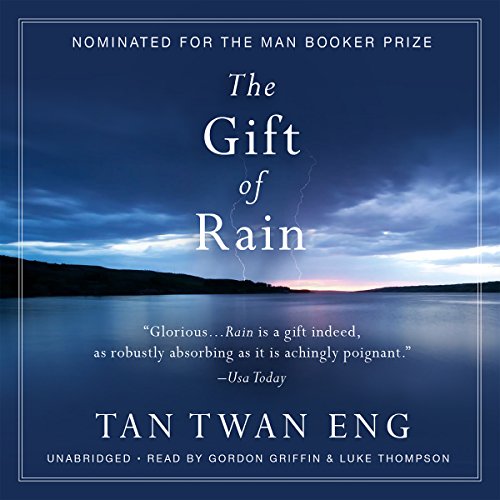 The Gift of Rain

For the first time, available as an audiobook.

The recipient of extraordinary acclaim from critics and the book-selling community, Tan Twan Eng's debut novel casts a powerful spell and has garnered comparisons to celebrated wartime storytellers Somerset Maugham and Graham Greene. Set during the tumult of World War II, on the lush Malayan island of Penang, The Gift of Rain tells a riveting and poignant tale about a young man caught in the tangle of wartime loyalties and deceits.

In 1939, 16-year-old Philip Hutton - the half-Chinese, half-English youngest child of the head of one of Penang's great trading families - feels alienated from both the Chinese and British communities. He at last discovers a sense of belonging in his unexpected friendship with Hayato Endo, a Japanese diplomat. Philip proudly shows his new friend around his adored island, and in return Endo teaches him about Japanese language and culture and trains him in the art and discipline of aikido. But such knowledge comes at a terrible price. When the Japanese savagely invade Malaya, Philip realizes that his mentor and sensei - to whom he owes absolute loyalty - is a Japanese spy. Young Philip has been an unwitting traitor, and must now work in secret to save as many lives as possible, even as his own family is brought to its knees.

"This remarkable debut saga of intrigue and akido flashes back to a darkly opulent WWII-era Malaya. Phillip Hutton, 72, lives in serene Penang comfort, occasionally training students as an akido master teacher of teachers. A visit from Michiko Murakami sends him spiraling back into his past, where he grows up the alienated half-British, half-Chinese son of a wealthy Penang trader in the years before WWII. When Hutton's father and three siblings leave him to run the family company one summer, he befriends a mysterious Japanese neighbor named Mr. Endo. Japan is on the opposing side of the coming war, but Endo paradoxically opts to train Hutton in the ways of aikido, in what both men come to see as the fulfillment of a prophecy that has haunted them for several lifetimes. When the Japanese army invades Malaya, chaos reigns, and Phillip makes a secret, very profitable deal. He cannot, however, offset the costs of his friendship with Endo. Eng's characters are as deep and troubled as the time in which the story takes place, and he draws on a rich palette to create a sprawling portrait of a lesser explored corner of the war. Hutton's first-person narration is measured, believable and enthralling." (Publishers Weekly)