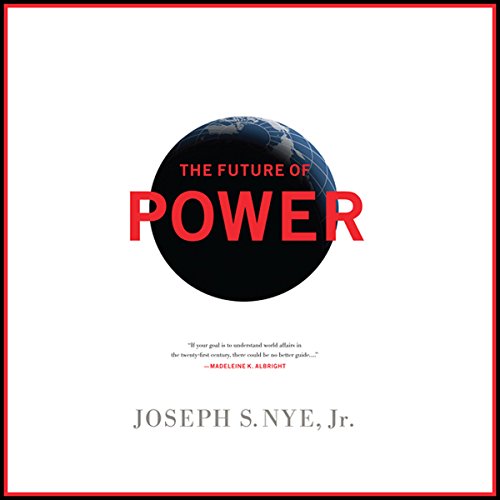 The Future of Power

In the 16th century, control of colonies and gold bullion gave Spain the edge; 17th-century Netherlands profited from trade and finance; 18th-century France gained from its larger population, while 19th-century British power rested on its primacy in the Industrial Revolution and its navy. In the era of Kennedy and Khrushchev, power resources were measured in terms of nuclear missiles, industrial capacity, and numbers of men under arms and tanks lined up ready to cross the plains of Eastern Europe. But the global information age of the 21st century is quickly rendering these traditional markers of power obsolete, remapping power relationships.

In The Future of Power, Joseph S. Nye, Jr., a longtime analyst of power and a hands-on practitioner in government, delivers a new power narrative that considers the shifts, innovations, bold technologies, and new relationships that will define the 21st century. He shows how power resources are adapting to the digital age and how smart power strategies must include more than a country’s military strength. Information once reserved for the government is ow available for mass consumption. The Internet has literally put power at the fingertips of nonstate agents, allowing them to launch cyberattacks on governments from their homes and creating a security threat that is felt worldwide. But the cyberage has also created a new power frontier among states, ripe with opportunity for developing countries. At the beginning of the twenty-first century, America had about a quarter of the world’s product but only 5 percent of its population. It was indisputably the most powerful nation in the world, unsurpassed in military strength and ownership of world resources. Today, China, Brazil, India, and others are increasing their share of world power resources, but remain unlikely to surpass America as the most powerful nation if the United States adopts new strategies designed for a global information age.The Internet’s ultimate impact on the nature of power is a concern shared by nations around the world. The Future of Power, by examining what it means to be powerful in the 21st century, illuminates the road ahead.