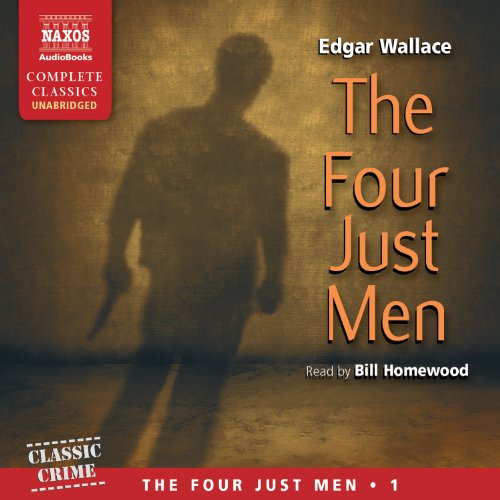 Originally written in 1920, this entertaining novel benefits from the superb performance of narrator Bill Homewood. The story focuses on four men with ostensibly laudable goals who battle injustice like modern-day Robin Hoods. Yet the four remain enigmas, whose motives at time appear to be highly questionable. Because the protagonists lack sufficient individual personalities to make it easy for readers to distinguish among them, it is even harder to ascertain their ultimate goals. Fortunately, Bill Homewood demonstrates the power of a great reader. He transitions beautifully between characters and provides each with a distinctive timbre, tone, and personality, thus overcoming the novel's limitations.

Edgar Wallace’s classic vigilante detective series The Four Just Men – involving four wealthy and resourceful individuals determined to take the law into their own hands – has maintained its popularity for over a century. It began with The Four Just Men in 1905, and was followed by five other books recounting further adventures, the Walter Ford film (1939), and a TV series (1959-60).

In this, the opening volume, the mysterious Four Just Men punish by death those who are beyond the reach of the law. When Foreign Secretary Sir Philip Ramon’s proposed Aliens Extradition Bill threatens the safety of a Spanish resistance leader, the men warn Sir Philip that he must either withdraw the legislation or face death.

This is a gripping novel in which the police struggle to protect Ramon and capture the men against the fast approaching deadline.