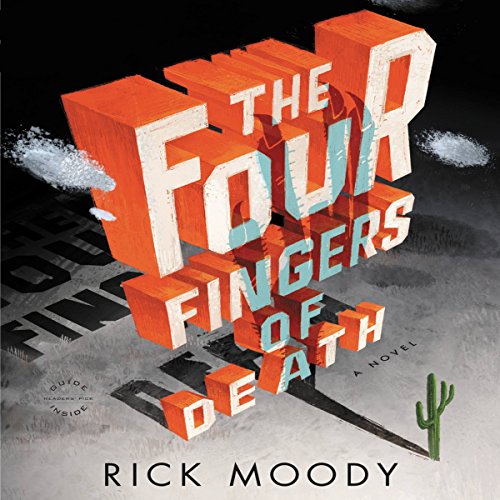 The Four Fingers of Death

The Four Fingers of Death

How would Montese Crandall, our protagonist and a struggling writer whose biggest success is the novelization of a remake of an old horror movie, describe Chris Patton’s performance of Rick Moody’s comic tour-de-force The Four Fingers of Death? It depends which Crandall you ask.

The Crandall we meet in the introduction to Four Fingers sounds as serious as the Moody many people know, the creator of such austere studies of suburban malaise like The Ice Storm and Purple America. This Crandall specializes in distilling his novels down to their essential elements. Then he distills those distillations down even further — and further still until he arrives at diamond-like nuggets of truth. But Crandall doesn’t stop there. No. He goes on and pulverizes those truths even more until all he’s left with is one single sentence: “Go get some eggs, you dwarf.” or “Last one home goes without anesthesia.” This Crandall would probably describe Patton’s passionate reading of Moody’s novel with something like, “My God, he did it!” or “Somebody give that man a scotch.”

Then there’s the Crandall who writes the novelization of the racy remake of The Crawling Hand, a creepy black-and-white B movie from 1963. This Crandall has never met a word or digression he doesn’t love. This Crandall — the bastard child of Tristram Shandy and Moby Dick raised in an ashram by peyote-eating, self-help book-quoting survivalists — revels in the hallucinatory possibility of language. This Crandall would lovingly write page after page about how Patton’s pulsating voice brings the rhythm of Moody’s manic magnum opus to life. Patton reads with gusto Moody’s vision of an America in the not-so-distant future that barely squeaks by and is populated with crackpots, conspiracy theorists, junk scientists, and sex-crazed teenagers who listen to Dead Girlfriend-genre heavy metal. This might sound familiar, except the characters in this novelization of a remake of a movie no one has ever heard of are being terrorized by a powerful, bacteria-infested, perverted four-fingered hand from Mars.

The verbose Crandall would marvel at Patton’s verbal dexterity, his ability to intone the scientific and militaristic techno babble with a straight face one second, then transform his voice into a Valley Girl fashion pop tart or the foul-mouthed son of a Korean scientist desperately trying to reanimate his cryogenically frozen dead wife stored in a refrigerator in his garage.

Yes, Patton pulls it all off, performing The Four Fingers of Death like a one-man Mercury Theater, keeping the audience spellbound as he tells a tale so tall, you smile at the absurdity of it all and anxiously await to hear the next chapter. Because let’s face it. Anything can happen. And that’s part of the absurd, giddy joy of listening to Moody’s latest. —Ken Ross

Montese Crandall is a downtrodden writer whose rare collection of baseball cards won't sustain him, financially or emotionally, through the grave illness of his wife. Luckily, he swindles himself a job churning out a novelization of the 2025 remake of a 1963 horror classic, "The Crawling Hand." Crandall tells therein of the United States, in a bid to regain global eminence, launching at last its doomed manned mission to the desolation of Mars. Three space pods with nine Americans on board travel three months, expecting to spend three years as the planet's first colonists. When a secret mission to retrieve a flesh-eating bacterium for use in bio-warfare is uncovered, mayhem ensues. Only a lonely human arm (missing its middle finger) returns to earth, crash-landing in the vast Sonoran Desert of Arizona. The arm may hold the secret to reanimation or it may simply be an infectious killing machine. In the ensuing days, it crawls through the heartbroken wasteland of a civilization at its breaking point, economically and culturally--a dystopia of lowlife, emigration from America, and laughable lifestyle alternatives.

The Four Fingers of Death is a stunningly inventive, sometimes hilarious, monumental novel. It will delight admirers of comic masterpieces like Slaughterhouse-Five, The Crying of Lot 49, and Catch-22.