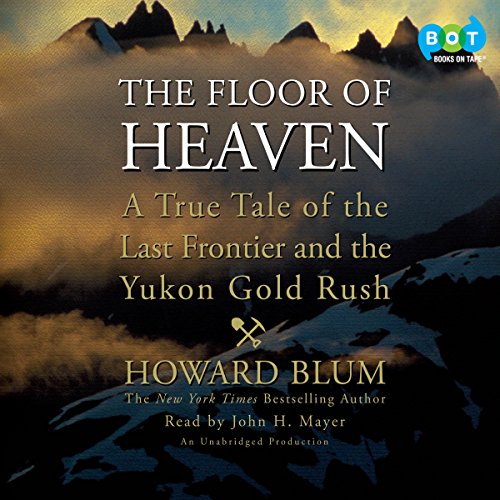 The Floor of Heaven

It is the last decade of the 19th century. The Wild West has been tamed and its fierce, independent and often violent larger-than-life figures – gun-toting wanderers, trappers, prospectors, Indian fighters, cowboys, and lawmen –are now victims of their own success. They are heroes who’ve outlived their usefulness.

But then gold is discovered in Alaska and the adjacent Canadian Klondike and a new frontier suddenly looms - an immense unexplored territory filled with frozen waterways, dark spruce forests, and towering mountains capped by glistening layers of snow and ice.

“Klondicitis,” a giddy mix of greed and lust for adventure, ignites a stampede. Fleeing the depths of a worldwide economic depression and driven by starry-eyed visions of vast wealth, tens of thousands rush northward.

Joining this throng of greenhorns and grifters, whores and highwaymen, sourdoughs and seers are three unforgettable men. In a true-life tale that rivets from the first page, we meet Charlie Siringo, a top-hand sharp-shooting cowboy who, after futilely trying to settle down with his new bride, becomes one of the Pinkerton Detective Agency’s shrewdest; George Carmack, a California-born American Marine who’s adopted by an Indian tribe, raises a family with a Taglish squaw, makes the discovery that starts off the Yukon Gold Rush – and becomes fabulously rich; and Soapy Smith, a sly and inventive predator-conman who rules a vast criminal empire.

As we follow this trio’s lives, we’re led inexorably into a perplexing mystery. A fortune in gold bars has somehow been stolen from the fortress-like Treadwell Mine in Juneau, Alaska, with no clues as to how the thieves made off with such an immensely heavy cargo. To many it appears that the crime will never be solved.

“Full of suspense…an amazing real-life adventure story, peopled with characters that any novelist would be proud to have invented: first-rate entertainment. (Michael Korda, New York Times best-selling author of Hero, With Wings Like Eagles, and Ike)
“In the tradition of great history as great literature…highly recommended…readers will be richly rewarded by Blum’s masterful use of a colorful cast of genuine historical characters set in the majestic northwestern wilderness.” ( Library Journal)
"Wildly compelling...a truly memorable frontier tale."( Kirkus)