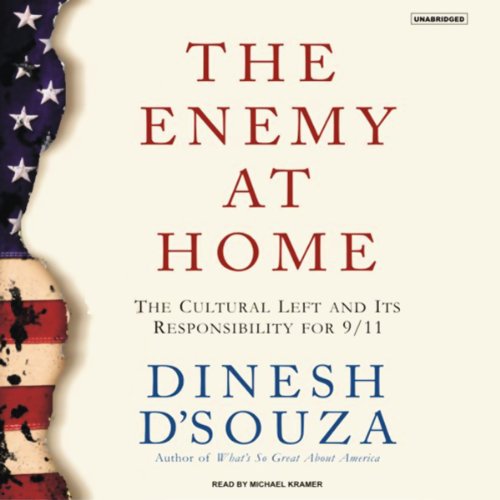 The Enemy at Home

Dinesh D'Souza, the most original and controversial writer on politics and society in the U.S. today, uncovers the links between the spread of American pop culture, leftist ideas, and secular values and the rise of anti-Americanism throughout the world.

In The Enemy at Home, D'Souza makes the startling claim that the 9/11 attacks and other terrorist acts around the world can be directly traced to the ideas and attitudes perpetrated by America's cultural left.

D'Souza shows that liberals - people like Hillary Clinton, Ted Kennedy, Barney Frank, Bill Moyers, and Michael Moore - are responsible for fostering a culture that angers and repulses not just Muslim countries but also traditional and religious societies around the world. Their outspoken opposition to American foreign policy, including the way the Bush administration is conducting the war on terror, contributes to the growing hostility, encouraging people both at home and abroad to blame America for the problems of the world. He argues that it is not our exercise of freedom that enrages our enemies but rather our abuse of that freedom, from the sexual liberty of women to the support of gay marriage, birth control, and no-fault divorce, and the aggressive exploitation of our vulgar, licentious popular culture.

The cultural wars at home and the global war on terror are usually viewed as separate problems. In this groundbreaking book, D'Souza shows that they are one and the same. It is only by curtailing the left's attack on religion, family, and traditional values that we can persuade moderate Muslims and others around the world to cooperate with us and to begin to shun the extremists in their own countries.

"An interesting perspective on the hostilities between the West and the Muslim world." ( Booklist)

Interesting and informative book. Well narrated. I don't agree with the writer in everything he says but well written as all of the book of his bibliography