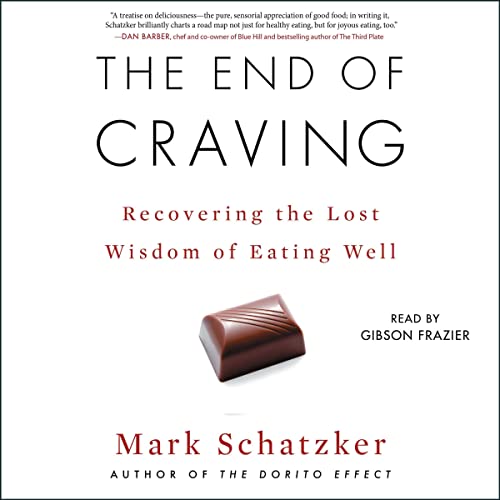 The End of Craving

Acclaimed journalist and author of The Dorito Effect delivers a groundbreaking, entertaining, and informative work that reveals how our dysfunctional relationship with food began — and how science is leading us back to healthier living and eating.

For the last 50 years, we have been fighting a losing war on food. We have cut fat, reduced carbs, eliminated sugar, and attempted every conceivable diet only to find that 88 million American adults are prediabetic, more than a hundred million have high blood pressure, and nearly half now qualify as obese. The harder we try to control what we eat, the more unhealthy we become. Why?

Mark Schatzker has spent his career traveling the world in search of the answer. In The Dorito Effect, he revealed the startling relationship between flavor and nutrition. In Steak, he was one of the first authors to recognize the critical importance of regenerative agriculture. Now, in The End of Craving, he poses an even more profound question: What if the key to nutrition and good health lies not in resisting the primal urge to eat but in understanding its purpose?

Beginning in the mountains of Europe and the fields of the Old South, Schatzker embarks on a quest to uncover the lost art of eating and living well. Along the way, he visits brain scanning laboratories and hog farms, and encounters cultural oddities and scientific paradoxes — northern Italians eat what may be the world’s most delicious cuisine, yet are among the world’s thinnest people; laborers in southern India possess an inborn wisdom to eat their way from sickness to good health. Schatzker reveals how decades of advancements in food technology have turned the brain’s drive to eat against the body, placing us in an unrelenting state of craving. Only by restoring the relationship between nutrition and the essential joy of eating can we hope to lead longer and happier lives.

Combining cutting-edge science and ancient wisdom, The End of Craving is an urgent and radical investigation that will fundamentally change how we understand both food and ourselves.