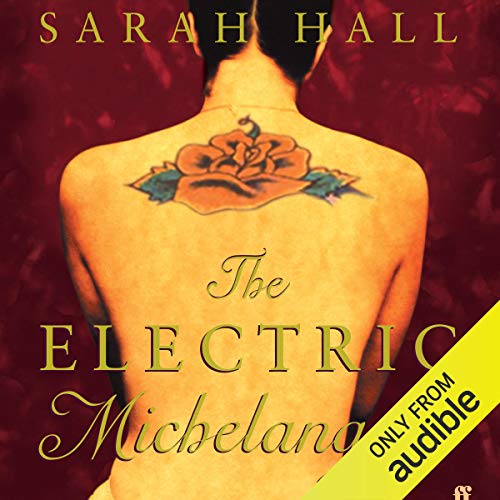 Shortlisted for the Man Booker Prize 2004

On the windswept front of Morecambe Bay, Cy Parks spends his childhood years first in a guesthouse for consumptives run by his mother and then as apprentice to alcoholic tattoo artist Eliot Riley. Thirsty for new experiences, he departs for America and finds himself in the riotous world of the Coney Island boardwalk, where he sets up his own business as 'The Electric Michelangelo'.

In this carnival environment of roller-coasters and freak-shows, Cy becomes enamoured with Grace, a mysterious immigrant and circus performer who commissions him to cover her entire body in tattooed eyes.

Hugely atmospheric, exotic, and familiar, The Electric Michelangelo is a love story and an exquisitely rendered portrait of seaside resorts on opposite sides of the Atlantic by one of the most uniquely talented novelists of her generation.

Sarah Hall was born in Cumbria and currently lives in Norwich, Norfolk. She is the author of four novels: Haweswater, The Electric Michelangelo, The Carhullan Army, and How to Paint a Dead Man; a collection of short stories, The Beautiful Indifference; original radio dramas; and poetry.

She has won several awards, including the Commonwealth Writers’ Prize for Best First Novel, the Betty Trask Award, the John Llewellyn Rhys Prize, the James Tiptree, Jr. Award, the Edge Hill University Short Story Prize, and has twice been recipient of the Portico Prize. She has been shortlisted for the Man Booker Prize, the Prix Femina Etranger, the Arthur C. Clarke Award for science fiction, the BBC National Short Story Award and the Frank O’Connor International Short Story Award. This year she was named one of Granta’s Best Young British Novelists.

A Tattoo Artist in his Life long Search for Love

Sarah Hall is an amazing author and her novel "The Wolf Border" was one of the best books, I ever read. "The Electric Michelangelo" is an impressive piece of work, but not quite as easy to digest. The prose is excellent, but its elaborateness renders it a little bit cumbersome and the storyline makes you wonder sometimes, where this is going.

Hall tells the story of the tattoo artist Cyril Parks from the north coast of England, his early childhood with his widowed mother Reeda, his apprenticeship to the talented, but eccentric and abusive Eliot Riley and his bizarre life on frivolous and decadent Coney Island in North America.

Cyril’s mother Reeda runs the Bayview Hotel in Morecambe and is a compassionate and benevolent woman, who takes loving care of her consumptive tenants, but also performs secret abortions. In an effort to get away from the human misery of his mother’s hotel, he wants to become a tattoo artist and turns to Eliot Riley. For many years he tolerates humiliation and abuse, but perfects his art. After Rileys death he moves to the US and settles on Coney Island in the freaky community of con artists and entertainers. It is on Coney Island, where he falls in love with Grace, who wants her body tattooed with 109 eyes.

Cyril’s childhood story is deeply touching and the North of England is described in vivid colors and full of love. Riley’s search for love and meaning is timeless and touches our basic need for answers. The book goes beyond spinning a good yarn, it touches our nerves and makes us restless.

Sarah Hall is amazing as always.