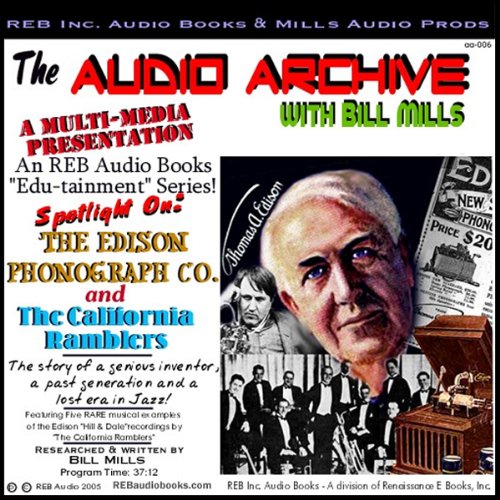 The Edison Phonograph Company and The California Ramblers

Here is the fascinating story of the Edison Phonograph Company and its "Hill and Dale" vertical recording process, illustrated by musical examples from vintage recordings of legendary jazz band, The California Ramblers (which included famed trumpeter Red Nichols and other jazz greats)!

This is the behind-the-scenes story of the invention, development and commercial promotion of the phonograph by Thomas Alva Edison, the "Genius of Menlo Park." When tinfoil recording cylinders were replaced by flat disks, Edison pioneered a unique "vertical" recording process that produced a fidelity unmatched in its day. Unfortunately, manufacturing costs rendered it impractical and by the 1920's nearly all other companies were successfully using a different process. Edison's stubborn insistence on sticking with "verticals" nearly to the end eventually put the company out of business. Nevertheless, historians and critics agree that the

Edison phonograph and disks provided the listener with the finest acoustic sound recordings of their time.Listen to the story of this forgotten moment in recording and Jazz history as told by audiophile Bill Mills and demonstrated by five carefully selected examples, from the Audio Archive, of Edison's unique process. These ultra-rare recordings open a window on the birth of Jazz as captured during its formative years and feature great arrangements with exciting improvised solos performed by a band of the hottest musicians of the era, The California Ramblers. Compare their performances of "Keep Smiling At Trouble," "Clementine," "The Stockholm Stomp," "Along Came Sweetness," and their sweetly suggestive version of "Tiptoe Through The Tulips" to the quality of other early Jazz recordings and you will understand why Edison championed his process to the bitter end!

If you love history or Jazz or just a good audiobook, here is a must have chronicle of a genius inventor, a past generation and a lost technology, researched and written by series cre...