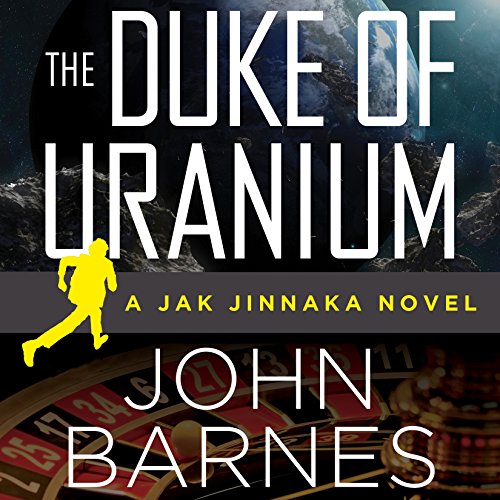 The Duke of Uranium

Jak Jinnaka plunges into a world of danger and intrigue beyond imagination as he is forced to ask: "Where's the party?" Jak Jinnaka's 36th-century teenage life has been nothing but fun - ignoring school, partying outrageously with his beautiful girlfriend, Sesh, and spending his uncle Sib's huge fortune. But while they are out for a wild night of post-graduation clubbing, Sesh is kidnapped by the dangerous, enigmatic Duke of Uranium. Bruised and battered, Jak wakes up to a whole new reality: sweet, superficial Sesh is actually Princess Shyf of Greenworld, daughter of the rulers of a powerful faraway spaceport; kind and slightly dotty old Uncle Sib is a legendary spymaster; and Jak's whole life has been preparation for the world of espionage. Now, his maiden mission is to rescue his girlfriend from one of the most powerful aristocrats in the solar system - or is it? The world Uncle Sib has plunged him into has wheels within every wheel and hidden forces in every shadow, and the only thing that is just what it seems is Jak himself: an amoral party animal looking out for number one!