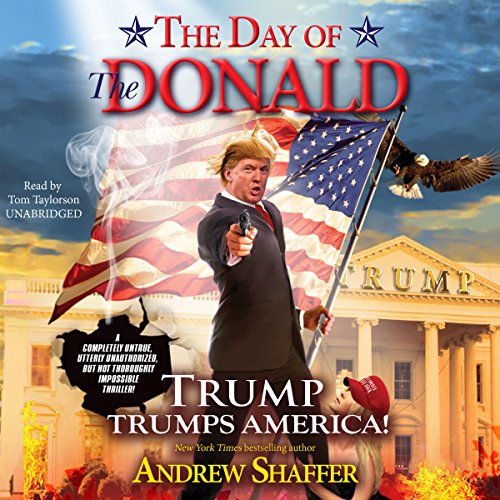 The Day of the Donald

Summer 2018. Two years into President Donald J. Trump's first term in office, America has never been greater. The Even Greater Wall along the Mexican border is under construction, paid for by Mexico. Americans have more money in their pockets thanks to lower taxes and the president's creative money-raising strategies. Who else would have thought to pay for FEMA's budget by suing the Catholic Church over property damage caused by acts of God? And while Trump's detractors may call him a tyrant, the American people love bullies when the victim is Congress: Every time they impeach the president, his approval rating skyrockets.

Ever conscious of his hugely important historical legacy, The Donald plucks disgraced tabloid reporter Jimmie Bernwood - the man responsible for publishing the infamous Ted Cruz sex tape - from the depths of anonymity to become his official biographer, giving him enviable access to the gold-plated White House and all of its secrets.

When Trump's previous biographer turns up dead, Bernwood must do some real investigative reporting, get to the bottom of a long series of murders - and, if it's absolutely unavoidable, save the country.

Das sagen andere Hörer zu The Day of the Donald