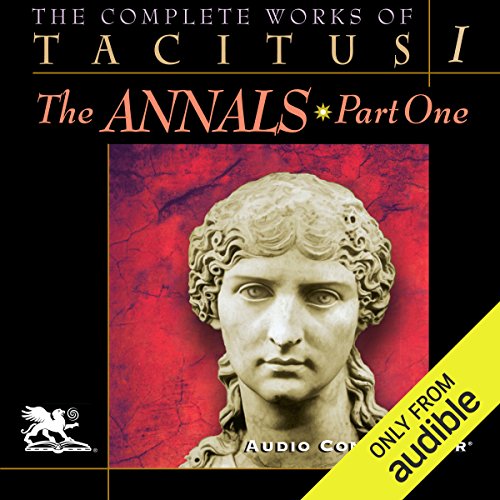 The Complete Works of Tacitus: Volume 1: The Annals, Part 1

The Complete Works of Tacitus: Volume 1: The Annals, Part 1

In the pantheon of ancient men of letters, none hold a more venerated position than the Roman historian, Tacitus, venerated alike for the accuracy of his chronicles as well as for the superiority of his style. He was a writer of unexcelled genius and consummate skill. But his work fell into oblivion not long after his death, and has come down to us based on the text of a single tattered manuscript from the Middle Ages. Tacitus was born sometime before A.D. 62 during the reign of Nero. He died shortly before or after the accession of the emperor Hadrian, around A.D. 120. Almost nothing is known of him.

The Annals cover that period of Roman history from the reign of Tiberius to that of Nero. Parts of the work are missing, including a few sections from Tiberius, all the sections on Caligula, the early reign of Claudius, and the last two years of Nero's life. But what remains is breathtaking in its scope and velocity. Tacitus takes us on a mad river rafting voyage down a raging torrent of history. The story fluctuates between events at the court in Rome to the battlefields of Germany, between the bravest deeds of selfless courage and the most sordid acts of vengeful hostility. Nothing escapes the jaded eye of Tacitus as we experience the decadence of Rome in all its haughty grandeur.

Part 1 of The Annals begins with the death of Augustus and provides a brief look at his accomplishments and reign before proceeding with the story of Tiberius. Along with events at Rome, we are also taken to the scene of conflict in Parthia and Germany. We witness the rise of the evil Sejanus and learn how he poisoned the mind of Tiberius and turned his rule into a reign of terror.

This production uses the famous translation by Church and Brodribb, considered the finest in the English language.

The Annals concludes in Volume 2 of The Complete Works of Tacitus.