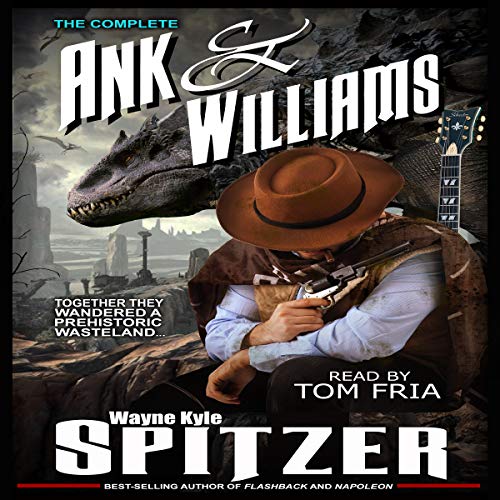 The Complete Ank and Williams

The Complete Ank and Williams

Williams misted up as he thought of the saloon girl who had shown him such affection.

“I said I won’t shoot them,” he snapped, and turned toward Luna, who was cowering at the top of the stairs. “We’ll have to find another way.”

To Luna he said: “It’s all right, sweetie. Everything’s going to be all right.”

(Dammit, Will, I can’t handle an entire pack on my own, and you know it. Now, are we serious about making it to Tanelorn, or at least Barley’s, or not? Or have all our plans changed because a saloon girl threw a leg up on you in a town we will never see again?)

“Meh,” Williams sighed angrily and moved toward the building’s front windows, which Ank had blocked with pinball machines and video games, with only partial success.

(Don’t walk away from me when I’m talking to you, dammit!) Ank lumbered after him, the tiled floor cracking beneath his elephantine feet. (We made a pact. And what about the girl? Would you see her torn to pieces by those things while you simply watched?)

“Go away!” Williams hissed. He peeked around one of the machines and saw the raptors lined up in the gathering dark, waiting to make their move, waiting to rush the snack bar and overwhelm them, waiting to kill them or worse, to turn them into creatures like themselves.

“Are you talking to me?” whined the girl, her voice seeming to bleed as if cut by invisible knives. “Why would you want me to go away all of a sudden?”

(I can’t do it, Will. They’ll swarm in beneath my armor and...they’ll tear me to pieces.)

Williams held up his rifle - pressed his forehead against it.

“Yes, my love, come out!” A new voice. Her voice. Katrina. Williams squeezed his eyes shut.