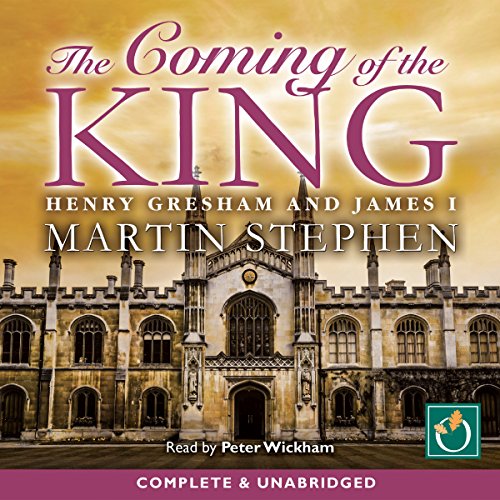 The Coming of the King

Queen Elizabeth I is dying, and the king of England’s oldest and bitterest enemy, Scotland, is poised to take the throne. With all her old allies and advisors dead, she turns to the only man she can trust: Henry Gresham.

Gresham finds himself unwillingly dragged into the political manoeuvring that will decide England’s next ruler. Involved in the race to be the first to tell James VI of Scotland that Elizabeth has chosen him as her successor, Gresham faces savage attacks on his home and those he loves.

"Stephen has a good feel for the momentary decisions that can help to shape the course of history." ( The Times)
"Henry Gresham is a hero for all seasons." (Val McDermid)
"Breathtaking plotting and delightful characterization in a Jacobean tale of murder and political intrigue - a pyrotechnic, explosive rocket of a book." (Jenni Murray)
"Martin Stephen takes a refreshingly different approach in his Jacobean thriller...dastardly political and religious manoeuvrings, footpads, trollops and demented Catholics, all add up to a terrific book, the first of a long series, we must hope." ( Spectator)
"Here is a thriller that is just exploding with action and double-dealing and which paints Jacobean London in vivid and dramatic detail." ( Northern Echo)

Das sagen andere Hörer zu The Coming of the King