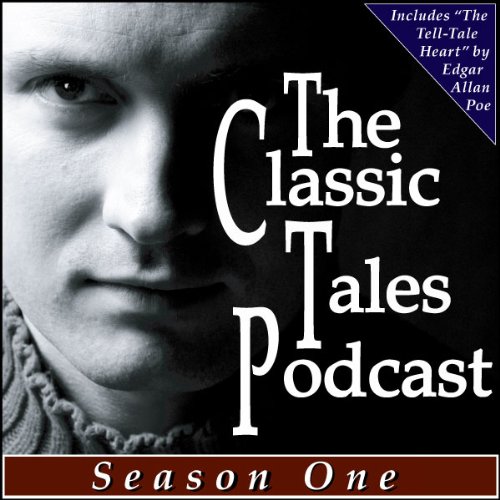 The Classic Tales Podcast Season One

The first award-winning season of The Classic Tales Podcast, topping the iTunes charts as the #3 overall podcast. Here B.J. Harrison reintroduces the world to the greatest short fiction ever written, from Poe, Dickens, Hardy, Stevenson, Fitzgerald and many, many others.

Titles include: "The Cask of Amontillado", by Edgar Allan Poe; "The Speckled Band", by Sir Arthur Conan Doyle; "Barbara of the House of Grebe", by Thomas Hardy; "Rappaccini's Daughter", by Nathaniel Hawthorne; "The Monkey's Paw", by W.W. Jacobs; "The Lost Phoebe", by Theodore Dreiser; "The Pit and the Pendulum", by Edgar Allan Poe; "The Magic Shop", by H.G. Wells; "The Red Headed League", by Sir Arthur Conan Doyle; "The Baron of Grogswig", by Charles Dickens; "The Ambitious Guest", by Nathaniel Hawthorne; "The Tell-Tale Heart", by Edgar Allan Poe; "The Mortal Immortal", by Mary Shelley; "Tobin's Palm and The Ransom of Red Chief", by O. Henry; "The Eyes", by Edith Wharton; "The Happy Prince and Other Tales", by Oscar Wilde; "The Devil and Tom Walker", by Washington Irving; "Hurst of Hurstcote", by E. Nesbit; "Selections from Hamlet", by William Shakespeare; "The Captain of the Pole Star", by Sir Arthur Conan Doyle; "The Vampyre", by John Polidori; "The Mark of the Beast", by Rudyard Kipling; "The Hand", by Guy de Maupassant; "The Legend of Sleepy Hollow", by Washington Irving; "Young Goodman Brown", by Nathaniel Hawthorne; "The Celebrated Jumping Frog of Caleveras County", by Mark Twain; "The Cortship of Miles Standish", by Henry W. Longfellow; "The Curious Case of Benjamin Button", by F. Scott Fitzgerald; "The Gift of the Magi", and "The Last Leaf" by O. Henry; "A Christmas Carol", by Charles Dickens.