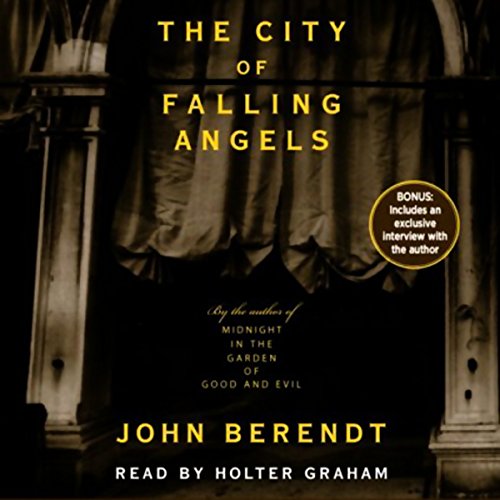 The City of Falling Angels

It was a few years ago that Midnight in the Garden of Good and Evil achieved a record-breaking four-year run on The New York Times best-seller list. John Berendt's inimitable brand of nonfiction brought the dark mystique of Savannah so startlingly to life for millions of people that tourism to Savannah increased by 46 percent. It is Berendt and only Berendt who can capture Venice, a city of masks, a city of riddles, where the narrow, meandering passageways form a giant maze, confounding all who have not grown up wandering into its depths. Venice, a city steeped in a thousand years of history, art, and architecture, teeters in precarious balance between endurance and decay. Its architectural treasures crumble, foundations shift, marble ornaments fall, even as efforts to preserve them are underway.

The City of Falling Angels opens on the evening of January 29, 1996, when a dramatic fire destroys the historic Venice opera house. The loss of the Fenice, where five of Verdi's operas premiered, is a catastrophe for Venetians. Arriving in Venice three days after the fire, Berendt becomes a kind of detective, inquiring into the nature of life in this remarkable museum-city-while gradually revealing the truth about the fire.

"One of the longest-awaited literary encores in recent times....Teems with a diverse cast of aristocrats and lowlifes....Berendt's voice is gentle and tolerant, reveling in human complexities; he has no pretensions of offering anything more than a good story." ( The New York Times Book review)
"In lieu of Savannah, he offers us Venice, another port city full of eccentric citizens and with a long, colorful history." ( Publishers Weekly)