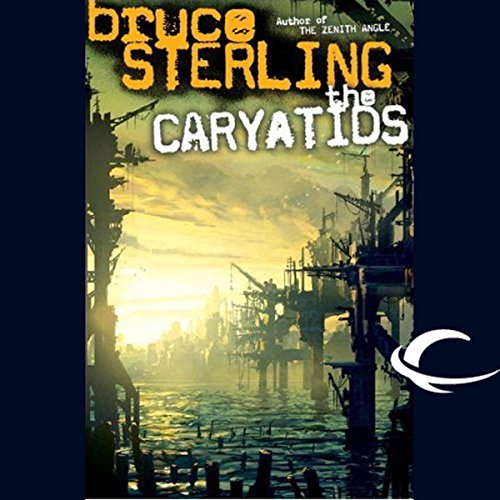 Alongside William Gibson and Neal Stephenson, Bruce Sterling stands at the forefront of a select group of writers whose pitch-perfect grasp of the cultural and scientific zeitgeist endows their works of speculative near-future fiction with uncanny verisimilitude.

Now, with The Caryatids, Sterling has written a stunning testament of faith in the power of human intellect, creativity, and spirit to overcome any obstacle - even the obstacles we carry inside ourselves.

The world of 2060 is divided into three spheres of influence, each fighting with the others over the resources of fallen nations and an environment degraded almost to the point of no return. There is the Dispensation, centered in Los Angeles, where entertainment and capitalism have fused with the highest of high-tech. There is the Acquis, a Green-centered collective that uses invasive neurological technology to create a networked utopia. And there is China, the sole surviving nation-state, a dinosaur that has prospered only by pitilessly pruning its own population.

Products of this monstrous world, the daughters of a monstrous mother, and - according to some - monsters themselves, are the Caryatids: the four surviving female clones of a mad Balkan genius and wanted war criminal.

Radmila is a Dispensation star determined to forget her past by building a glittering, impregnable future. Vera is an Acquis functionary dedicated to reclaiming their home, the Croatian island of Mljet, from catastrophic pollution. Sonja is a medical specialist renowned for selflessly risking herself to help others. And Biserka is a one-woman terrorist network.

The four "sisters" are united only by their hatred for their "mother" - and for one another. When evidence surfaces of a coming environmental cataclysm, the Dispensation sends its greatest statesman - or salesman - John Montgomery Montalban, husband of Radmila, and lover of Vera and Sonja, to gather the Caryatids together in an audacious plan to...

"A new novel from Sterling is a guarantee of something wild and tasty, and The Caryatids amply fulfills that promise." (Publishers Weekly)

The pages of this book are filled with brainless chit chat dialogues and useless pathetic speeches.
Maybe this would make them a good filling for your roof as an insulation in winter times.
Otherwise it’s completely worthless. Be warned not to waste a precious minute of your life with it.
Should you decide differently however, you would find idiots with shoulder rocket launchers demolishing buildings as a celebration.
You would find figures with no characters, women who kiss mens‘ feet right after he would force her to become his wife and then right away beat her with a belt and her still sobbing and talking about love and cooking.
I can not even criticise the story, because there isn’t one. It’s just a row of non fitting pictures glued together in a meaningless way.
I really only finished this annoying rubbish to earn the right of criticising it.
Unfortunately the audio book version will not even serve as toilet paper.