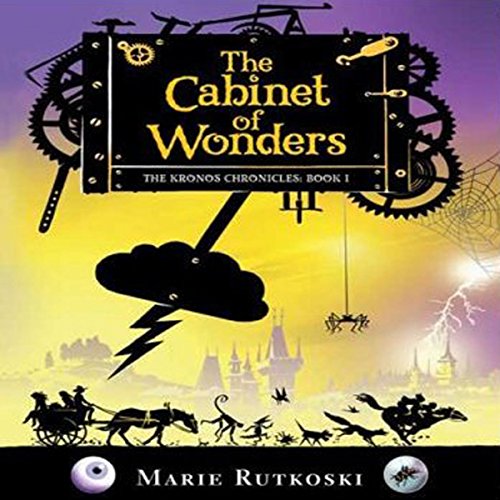 The Cabinet of Wonders

Petra Kronos has a simple, happy life. But it's never been ordinary. She has a pet tin spider named Astrophil who likes to hide in her snarled hair and give her advice. Her best friend can trap lightning inside a glass sphere. Petra also has a father in faraway Prague who is able to move metal with his mind. He has been commissioned by the prince of Bohemia to build the world's finest astronomical clock.

Petra's life is forever changed when, one day, her father returns home - blind. The prince has stolen his eyes, enchanted them, and now wears them. But why?

Petra doesn't know, but she knows this: she will go to Prague, sneak into Salamander Castle, and steal her father's eyes back. Joining forces with Neel, whose fingers extend into invisible ghosts that pick locks and pockets, Petra finds that many people in the castle are not what they seem, and that her father's clock has powers capable of destroying their world.

This startling debut novel, about the risks we take to protect those we love, brims with magic, political intrigue, and heroism.

"Rutkoski's fantasy features quirky characters, imaginative world building, and a hint of trouble to come." ( Booklist)
"Rutkoski effectively uses the romance of the region and the mystique of gypsy legends to evoke an atmosphere of danger and adventure. Her well-crafted fantasy world is a mix of magic and technology." ( Bulletin for the Center of Children's Books)