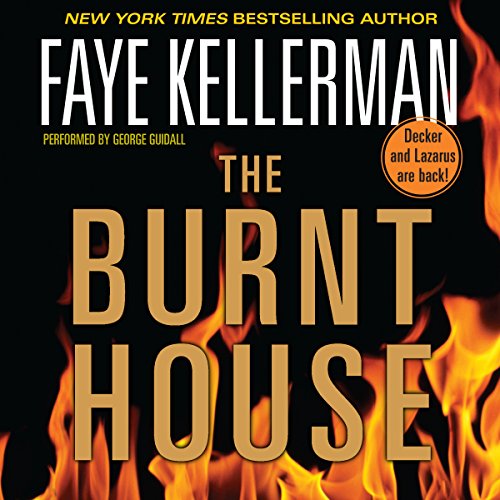 George Guidall is so comfortable performing the Rina Lazarus/Peter Decker series that even first-time listeners will feel right at home. In the sixteenth book featuring the married couple, Faye Kellerman builds tenderness, intelligence, and normalcy into Rina and Peter's Orthodox Jewish family life and their conversations about God, guilt, and sin. She produces a convoluted (if occasionally coincidence-prone) story, but, thanks in part to Guidall's top-notch performance, her characters have the gritty feel of real people. Guidall's pacing, vocal shifts, and delivery of the many Yiddish expressions sprinkled throughout are masterful. This is one listeners won't want to miss.

A small commuter plane carrying 47 passengers crashes into an apartment building, and LAPD Lieutenant Peter Decker works overtime to calm rampant fears. But a grisly mystery lives inside the plane's wreckage: the unidentified bodies of four extra travelers. And there is no sign of an airline employee who was supposedly on the catastrophic flight. The fate of the unaccounted-for flight attendant, 28-year-old Roseanne Dresden, remains a question mark more than a month after the horrific event, when the young woman's irate stepfather calls, insisting that she was never on-board the doomed plane. Instead, he claims, she was most likely murdered by her abusive husband. But why was Roseanne's name included on the passenger list?

Under pressure to come up with answers, Decker launches an investigation that carries him down a path of tragic history, dangerous secrets, and deadly lies - and leads him to the corpse of a three-decades-missing murder victim. And as the jagged pieces slowly fall into place, a frightening picture begins to form: a mind-searing portrait of unimaginable evil that will challenge Decker and his wife Rina's own beliefs about guilt and innocence and justice.