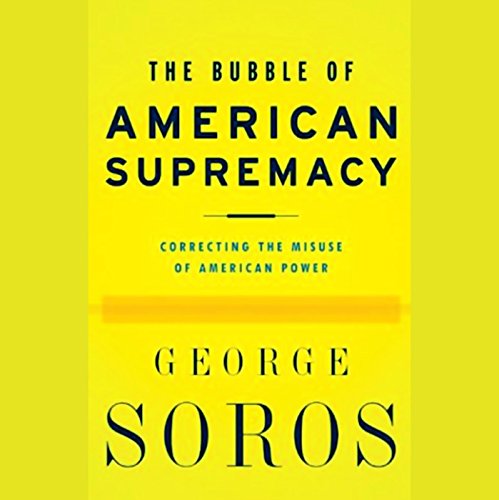 The Bubble of American Supremacy

The Bubble of American Supremacy

Long known as "the world's only private citizen with a foreign policy", George Soros combines his razor-sharp sense of economic trends with his passionate advocacy for open societies and decency in world politics to come up with a workable, and severely critical, analysis of the Bush administration's overreaching, militaristic foreign policy.

Soros believes that this administration's plans abroad come from the same sort of "bubble" psychology that afflicted our markets in the late 90s. They have used a real fact, our overwhelming military supremacy, to create a deluded worldview, that might makes right and that "you're either with us or against us", in the same way that the recent boom used a real fact, the growth in technology, to lead to a delusion, the "new economy".

Like the best of the books that have responded quickly to world events, The Bubble of American Supremacy, has a clear, intriguing, comprehensive thesis that makes necessary, and compelling, order of our seemingly disordered world.

"[An] intensely polemical but also succinct and well-reasoned book." ( Los Angeles Times Book Review)
"Soros offers historical perspective, social theory, and his own keen observational skills to make his points. This may be the one anti-Bush book that reaches an audience beyond the Democratic amen corner." ( Booklist)