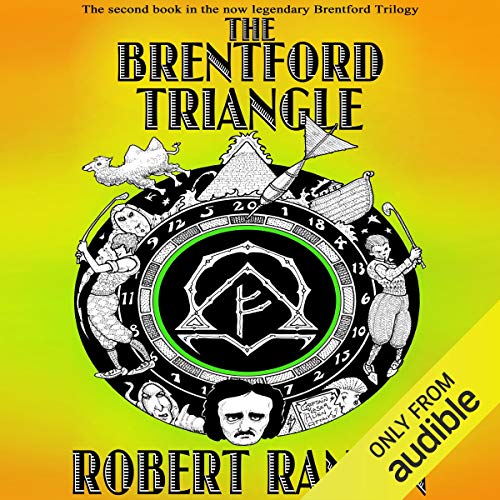 Comic writer Robert Rankin could not stop at making his Flying Swan regulars battle a demonic incarnation of Pope Alexander VI in The Antipope. In the sequel (and second book in the nine-book Brentford Trilogy), the boys at the pub must defeat an alien invasion. The setting for the series is of course Brentford, in West London, where Rankin was born and which Time Out called the British author's "Yoknapatawpha County". The author performs his own novel here, bringing an unparalleled verve and comedic timing to the fantastical chapters. Always hilarious and outlandish, this audiobook is guaranteed to liven up any long car ride or interplanetary journey.

Omally groaned. "It is the end of mankind as we know it. I should never have got up so early today," and all over Brentford electrical appliances were beginning to fail....

Could it be that Pooley and Omally, whilst engaged on a round of allotment golf, mistook laser-operated gravitational landing beams for the malignant work of Brentford Council? Does the Captain Laser Alien Attack machine in the bar of the Swan possess more sinister force than its magnetic appeal for youths with green hair? Is Brentford the first base in an alien onslaught on planet Earth?

Robert loves going on tour, signing books for fans, and his appearances at signings and conventions are legendary, often including a stand-up routine, a song (accompanied by his 'air-ukulele'), and an always-entertaining question-and-answer session.

"Stark raving genius...alarming and deformed brilliance" ( Observer)
"He becomes funnier the more you read him." ( Independent)
"Everybody should read at least one Robert Rankin in their life." ( Daily Express)
"One of the rare guys who can always make me laugh" (Terry Pratchett)
"To the top-selling ranks of humorists such as Douglas Adams and Terry Pratchett, let us welcome Mr Rankin" (Tom Hutchinson, The Times)