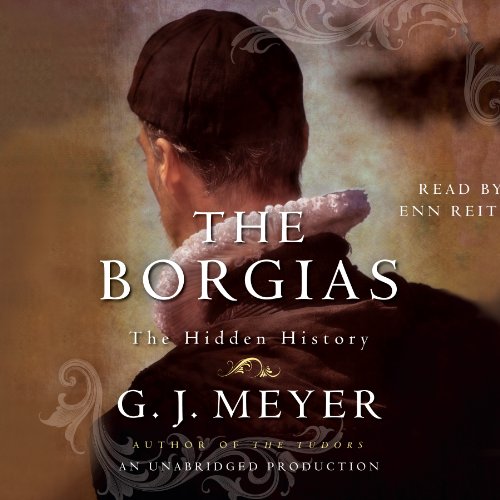 The startling truth behind one of the most notorious dynasties in history is revealed in a remarkable new account by the acclaimed author of The Tudors and A World Undone. Sweeping aside the gossip, slander, and distortion that have shrouded the Borgias for centuries, G. J. Meyer offers an unprecedented portrait of the infamous Renaissance family and their storied milieu.

They burst out of obscurity in Spain not only to capture the great prize of the papacy, but to do so twice. Throughout a tumultuous half-century - as popes, statesmen, warriors, lovers, and breathtakingly ambitious political adventurers - they held center stage in the glorious and blood-drenched pageant known to us as the Italian Renaissance, standing at the epicenter of the power games in which Europe’s kings and Italy’s warlords gambled for life-and-death stakes.

Five centuries after their fall - a fall even more sudden than their rise to the heights of power - they remain immutable symbols of the depths to which humanity can descend: Rodrigo, the Borgia who bought the papal crown and prostituted the Roman Church; Cesare, the Borgia who became first a teenage cardinal and then the most treacherous cutthroat of a violent time; Lucrezia, the Borgia as shockingly immoral as she was beautiful. These have long been stock figures in the dark chronicle of European villainy, their name synonymous with unspeakable evil.

But did these Borgias of legend actually exist? Grounding his narrative in exhaustive research and drawing from rarely examined key sources, Meyer brings fascinating new insight to the real people within the age-encrusted myth. Equally illuminating is the light he shines on the brilliant circles in which the Borgias moved and the thrilling era they helped to shape, a time of wars and political convulsions that reverberate to the present day, when Western civilization simultaneously wallowed in appalling brutality and soared to extraordinary heights. Stunning in scope, rich in telling detail, G. J. Meyer’s The Borgias is an indelible work sure to become the new standard on a family and a world that continue to enthrall.

A very rich and interesting work

The author gives the possibly fullest account about the time of the Borgias in Italy. Thouroughly researched, well explained. I am a fan of this audiobook.