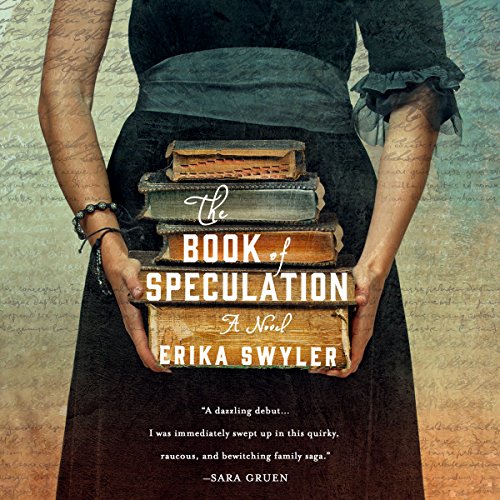 The Book of Speculation

"Dear Mr. Watson, I came across this book at auction as part of a larger lot I purchased on speculation. The damage renders it useless to me, but a name inside it - Verona Bonn - led me to believe it might be of interest to you or your family...."

Simon Watson, a young librarian on the verge of losing his job, lives alone on the Long Island Sound in his family home - a house, perched on the edge of a bluff, that is slowly crumbling toward the sea. His parents are long dead, his mother having drowned in the water his house overlooks. His younger sister, Enola, works for a traveling carnival reading tarot cards and seldom calls.

In late June Simon receives a mysterious package from an antiquarian bookseller. The book tells the story of Amos and Evangeline, doomed lovers who worked in a traveling circus more than 200 years ago. The paper crackles with age as Simon turns the yellowed pages filled with notes, sketches, and whimsical flourishes. His best friend and fellow librarian, Alice, looks on in increasing alarm.

Why does his grandmother's name, Verona Bonn, appear in this book? Why do so many women in his family drown on July 24? Is there a curse on his family - and could Enola, who has suddenly turned up at home for the first time in six years, risk the same fate in just a few weeks? In order to save her - and perhaps himself - Simon must try urgently to decode his family history while moving on from the past.

The Book of Speculation is Erika Swyler's gorgeous and moving debut, a wondrous novel about the power of books and family and magic.

"Narrator Ari Fliakos has complete control over this tale of magical realism as he underplays the drama and makes the outlandish seem plausible.... Fliakos's performance enhances a terrific book. Listeners will enjoy letting him guide them through the surreal elements of Swyler's story." ( AudioFile)